“I call on Fujimoristas to mobilise … we will demonstrate that he is innocent of the charges,” she said at a news conference.

Peru has pledged a fair trial and dignified treatment for the former president during his detention.

He insisted Fujimori will be treated with “equity and justice”.

“This is the first time that a court has ordered the extradition of a former head of state to be tried for gross human rights violations in his home country,” the organisation said in a statement.

“After years of evading justice, Fujimori will finally have to respond to the charges and evidence against him in the country he used to run like a mafia boss,” Jose Miguel Vivanco, HRW’s Americas director, said.

Gisela Ortiz, whose brother was murdered by a government death squad in 1992, told the Reuters news agency: “I am happy and satisfied. After so much despair for so long, we haven’t fought in vain.” 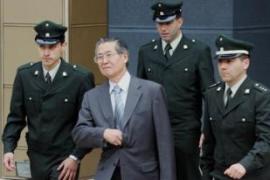