“Three or four people will be charged for violent behaviour against police officers,” said Flemming Steen Munch, a police spokesman.
“The others have been released.”
Not forgotten
Mads Firlings, another police spokesman, said: “It’s six months since we cleared the house there, and they want to show they have not forgotten.
“Almost immediately they started building barricades and throwing rocks through the windows of shops and banks.”
The situation had calmed down on Sunday morning and crews had begun to clean up the streets.
In March, the city saw several days of street violence and hundreds of people were arrested in demonstrations after police evicted squatters living in the Youth House.
Source : News Agencies 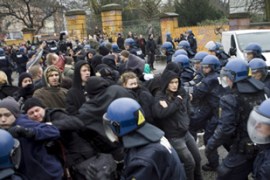 Small groups gathered outside the Danish embassy in Oslo to protest the demolition.

Workers wear face masks to conceal their identities as building is demolished. 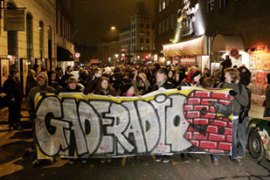 Protests against eviction of Copenhagen squatters lead to second night of violence. 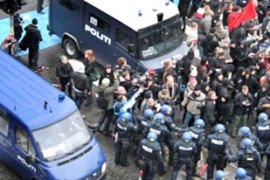