“We have received aid from neighbouring provinces, government agencies, and international organisations, and we are delivering it to those in need,” Muhammad Syamlan, vice governor of Bengkulu province, said.

“What people need most are tents because they are staying in the open.”

International aid agencies have sent teams to assess aid needs, although many outlying districts had still not been reached.

There have been a series of tremors ranging in intensity from 4.9 to 7.8 since Wednesday’s 8.4 earthquake, repeatedly setting off tsunami warnings in Indian Ocean countries.

There have, however, been no reports of the sort of massive waves that caused death and devastation throughout the region in 2004, after a quake with a magnitude of more than nine.

“The problem is these were very large earthquakes. They had every capability to generate large tsunami.”

At least two areas in Bengkulu province were hit by tsunamis after the quake on Wednesday, residents said.

Nearly 100 houses were damaged by a three-metre wave in Serangai, 70km north of Bengkulu city, but there were no casualties.

“Suddenly, I heard the rushing sound of water coming, it looked black. So I told everybody to run,” Johan, a 60-year-old farmer, said. He said most people had already fled to higher ground after the quake.

Some houses had been shifted about 10 metres by the water and tree trunks and large logs littered the main road.

Rustam Pakaya, head of the Indonesian health ministry’s crisis centre in Jakarta, said 14 people had been killed and 56 injured across the region since Wednesday.

Thousands of people are camping out in makeshift shelters or tents, using torches and kerosene lights, and setting fires overnight to keep warm.

Patients had to be moved into tents in front of the hospital in Bengkulu, the nearest major town to the epicentre of the quake that measured 8.4 on the Richter scale.

Roads in the north of Bengkulu province were lined with tents and a witness said about eight in 10 houses appeared to have been badly damaged or destroyed. 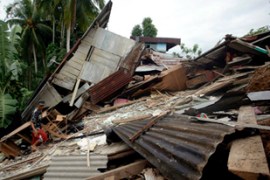 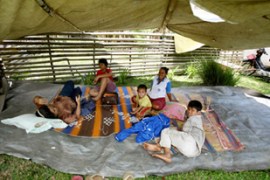 Government lifts warning after tsunami set off by original quake passes harmlessly by. 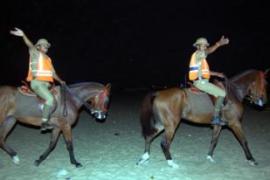 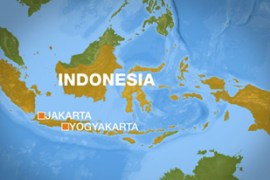 No possibility of a tsunami after Jakarta shaken by 7.3 magnitude tremor.