Iraq will disintegrate and an independent Kurdish state is likely to emerge should the US military ends its presence there, say experts ahead of  a crucial report on progress in the country by General David Petraeus, the US commander in Iraq.

General Petraeus is expected to brief US congress on the efficacy of the troop surge, which has seen the total US military presence swell to more than 160,000 and has been billed as a last-ditch effort to stabilise Iraq.

But Petraeus’s congressional testimony comes amidst political turmoil in Washington, as several senior Republicans and Democrats deride the current strategy in Iraq and call for troop withdrawal.

Peter W Galbraith, a former US diplomat, told Al Jazeera: “Iraq after a US pullout will look very much like Iraq today – a country that has broken up and is in the midst of a civil war between its Sunni Arabs and Shias.”

Galbraith, author of The End of Iraq: How American Incompetence Created a War without End, believes the Kurds will likely move towards independence, given the continued fighting in Baghdad.

“With its own president, parliament, army and flag, Kurdistan is already an independent country in everything but name,” he said.

Historically stateless, Kurds have lost out on every nation-building bid since the break-up of the Ottoman Empire at the end of First World War in 1918.

In 2002, Kurdish leaders drafted proposals for a federal system for Iraq – one that would leave Kurdistan within Iraq’s borders, but preserve much of the de facto autonomy Kurds gained under the US and UK-enforced no fly zones after the 1991 Persian Gulf War.

A new Iraqi constitution in 2005 also opened the way for a federalist system, but federalism may no longer be a viable option.

And as the Iraqi government comes under fire for failing to pursue reconciliation, experts have also faulted the US handling of post-invasion Iraq.

Vali Nasr, a Middle East expert at the Council on Foreign Relations and Professor of international politics at the Fletcher School of Law and Diplomacy at Tufts University, believes the US has failed to breach divisions between warring factions in Iraq.

He told Al Jazeera: “There has not been a settlement between all these parties because the US has not facilitated such an engagement and did not actually encourage it.”

He says US efforts at reconciliation between Sunni Arabs and Shia have failed because each has very radically different views on the political and religious composition of Iraq that could never be papered over by “so-called benchmarks”.

The failure to reach reconciliation in Iraq has, as a result, fuelled calls for Iraq to be carved up into separate states.

In 2006, a ‘plan B’ idea was floated in Washington calling, for the creation of an independent Kurdish state and for dividing the rest of the country.

Senator Joseph Biden, a leading Democrat, also co-authored with Leslie Gelb, former president of the Council on Foreign Relations, a proposal to divide Iraq along ethnic and sectarian lines.

The proposal envisages up to five mini-states emerging from the current instability, each represented at the United Nations as fully independent political entities but linked economically and socially, much like member states of the European Union.

But experts warn that breaking up Iraq and creating a future Kurdish state could backfire, with civil wars erupting as factions vie for power and neighbours intervene.

This could lead to greater conflict in the Middle East, a scenario many countries in the region are trying to avoid.

Steven Simon, the Hasib J Sabbagh senior fellow for Middle Eastern studies at the Council on Foreign Relations, believes that in the event of the country’s break-up, violence will worsen, particularly between Shia factions.

In Iraq’s south, Muqtada al-Sadr’s al-Mahdi Army, the Iran-backed Badr organisation and the Shia-led government have already been locked in several battles for control of ministries and police stations.

Turkey and Iran have repeatedly threatened military intervention should the Kurds declare independence.

This has troubled US policy-makers, as the stated White House position is that Iraq should remain sovereign and unified.

But the Kurdish factions have been America’s staunchest allies. If the Kurds opt for independence this could squeeze US interests between the Kurds and traditional Nato allies, Turkey.

However, the White House may be signalling that it has given up on political reconciliation and is focusing on what it calls emerging successes.

Earlier this week George Bush, the US president, visited Iraq and bypassed Baghdad. He went to a heavily fortified air base in al-Anbar province, where he met local tribal sheikhs who have been co-operating with US forces to drive al-Qaeda and its affiliates out of Iraq.

By ignoring Baghdad, where the US military says Iranian-backed militia are firmly in control, the Bush administration could be moving towards a “soft partition” of Iraq where the Kurds are the de-facto power in the north.

Experts warn, however, that by pushing the Sunni Arab “success” in al-Anbar and criticising the Iranian influence of the Baghdad government, the US could simply be repeating the mistakes of the past four years.

Between 2003 and 2007, the US supported the Shia-led government and targeted the Sunni-led armed opposition. A reversal would simply invite other countries to play out proxy wars in Iraq.

Galbraith says that while Turkey will be occupied with the question of Kurdish independence in the north, Iran and Saudi Arabia will be engaged in the centre and south of Iraq.

Nir Rosen, a fellow at the New America Foundation and author of In the Belly of the Green Bird, believes US strategists should have looked at the collapse of Somalia in the 1990s and Lebanon in the 1980s as examples of what could go wrong in Iraq.

He said: “Militias control Iraq, some are Sunni, some are Shia, and some are Kurdish. Some fight with each other. Warlords, as in Somalia, will control various neighborhoods and fight other warlords. Militias will provide security and rule.”

Rosen also believes Nuri al-Maliki will be the last prime minister of Iraq, because the country has neither the infrastructure nor the political will to hold new elections.

“The most important point is that it does not matter whether the US stays or leaves,” he said.

“The future of Iraq, with or without America, is Somalia.” 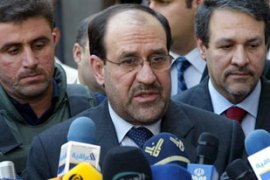 Sunni bloc back in Iraqi parliament 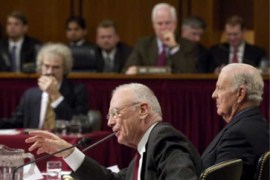 Reports on Iraq: An overview

Al Jazeera examines prior assessments of the political and military situation in Iraq. 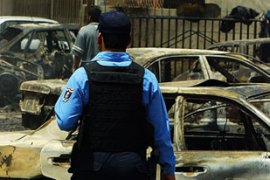