Musse Kulow, spokesman for the Somali prime minister, said: “We don’t see them as a threat since they cannot add to or reduce the explosions already taking place in Mogadishu.

“Those behind the violence have distanced themselves from the Asmara alliance.”

The new group was created after a week of talks in the Eritrean capital by some 400 delegates ranging from Islamic courts leaders to former Somali government officials.

A spokesman in Asmara said it would push for the “liberation of Somalia” through military and diplomatic means.

“But we will never accept a terrorist alliance that wants to use violence to gain any progress,” he said.

The formation of the alliance is yet another bone of contention between long-time foes Ethiopia and Eritrea, and is likely to push back any prospect of desperately needed reconciliation in Somali politics, analysts say.

Analysts said the only possible upside from the alliance would be to provide a unified movement to negotiate with, should the international community be able to broker talks.

Sheikh Hassan Dahir Aweys, another senior leader of the Islamic courts, who happens to be on UN and US lists of terrorism suspects, showed up at the Eritrea meeting after being in hiding for most of 2006.

But it was not clear what position, if any, he would take in the alliance.

In an interview with Eritrean state media published on Wednesday, Aweys criticised Washington.

“I am a Somali nationalist fighting for a free and united Somalia, and this is considered by the US administration as terrorism,” he said.

Meanwhile, in Somalia’s capital Mogadishu, the government announced on Thursday that a dusk-to-dawn curfew that had been in place for three months, has been lifted for the holy month of Ramadan.

The curfew has been in place since June, intended to help stop fighting between opposition fighters and the transitional government. 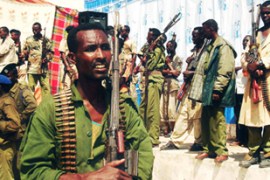