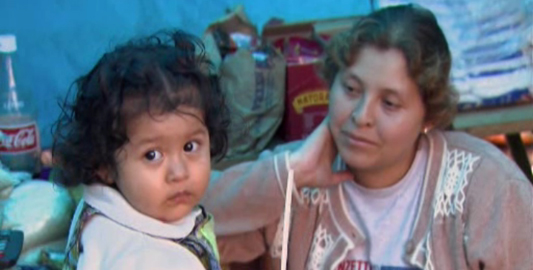 For many Guatemalan families, income is barely enough to pay for basic needs

As Guatemalans prepare to vote on Sunday, with polls revealing at least 40 per cent undecided, the country’s first woman and indigenous Indian to run for president, is facing major challenges ahead.

Rigoberta Menchu, a Nobel Peace Prize winner, hopes to represent her country’s indigenous people who make up nearly half of the country’s population – yet the majority do not support her as a leader.

“Our commitment is for our people to have water, medicine and attention, so they feel part of one country,” Menchu says during one of her campaign rallies.

But in some of Guatemala‘s poorest communities, campaign promises are not enough regardless of the candidate’s background.

Although Menchu has campaigned extensively to win her people’s support, many do not believe she will be tough against rising violence in the country.

Juan Rasbot, an indigenous tile-maker, is an example of the scepticism Menchu faces in her campaign.

Rasbot, who lives in the impoverished town of Chimaltenango, where he works long hours making tiles for just $30 a week, his income is barely enough to support his wife and children who work with him the tile yard.

Despite his extreme poverty, this labourer’s major concern is rampant crime.

“We see so much violence in our territory that only God can change things,” he told Al Jazeera.

His wife Augustina Gallina said whatever the election results, their lives were unlikely to change in the near future.

“Once the candidates win, they don’t care about us, and since we are poor, the government turns its back on us just because we are poor,” she said.

For these indigineous Guatemalans choosing a presidential candidate is much more than a matter of sharing the same ethnicity.

Guatemalans like the Rasbots are more concerned with security and economic issues.

Menchu is currently running sixth in the presidential race, but her supporters believe it is more important to stand as a symbol despite the odds.

Speaking to Al Jazeera, Nineth Montenegro, a Guatemalan congresswoman who runs Menchu’s party, said: “There’s been a phenomenon in this campaign in which the parties had to open up and allow for more diversity.

“That is a positive effect I would say that independently from what the polls say history will judge us. I think that what we are doing is unprecedented.”