The Israeli government has been criticised for “severe shortcomings” in its treatment of elderly holocaust survivors.

A report from the state comptroller’s office blamed red tape for preventing effective assistance being provided and urged action to help the ageing victims.

Leopold Rosen measures the world by the pipe that connects him to his oxygen machine. He suffers from several chest complaints dating back to when he hid from the Nazis in a forest in Poland.

The German government pays him compensation every month and he gets a small pension from Israel, but he can barely pay for both his drugs and his food.

“I was born of the 5th of June, 1922. Do I have time to wait for help from the government? There are a lot of people in the same position. They don’t have time to wait,” he told Al Jazeera.

Holocaust survivors have been trying to embarrass the Israeli government into action.

At a recent event, protesters wore symbols from the Nazi-era to drive home their point.

There are about one quarter of a million Holocaust survivors in Israel and official figures say that one in three of them live below the poverty line.

“We don’t need any charity. We need for people to live at the end of their life with some kind of dignity,” Colette Avital, the deputy speaker of the Knesset, said.

“Even though the problem was not caused by the state of Israel, the state bears a responsibility to its citizens.”

In many ways the experience of the Holocaust defines the state of Israel but until now there has never been a specific government allowance for survivors. That is something the government says it has been trying to address.

The first problem they encountered was that there was no real definition of a Holocaust survivor. So ministers commissioned a report which found that the state needed to set aside hundreds of millions of dollars to help them.

“It’s clear that if it rolls out over a few years, thousands of them will pass away,” Isaac Herzog, Israeli welfare minister, said as the government continued negotiations with survivors’ groups over plans to increase welfare payments.

“So our intention as a government, is to award a stipend of the highest level as soon as possible to the oldest echelon, that is 80 years or older,” he said.

Holocaust survivors occupy a unique position in Israeli society so the government is under particular pressure to help them before time runs out. 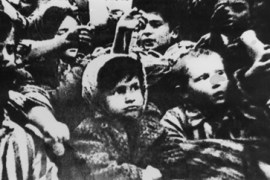