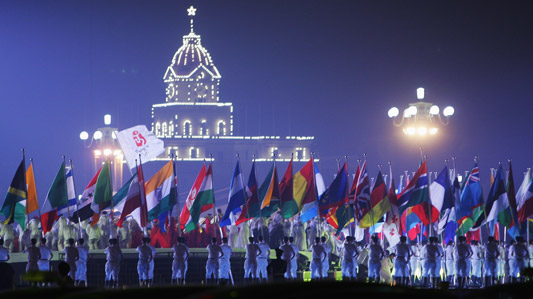 The Beijing Olympics will kick-off in exactly one year from today, and final preparations are under way to celebrate the countdown at one of China‘s most famous landmarks, the Tiananmen Square.

Al Jazeera’s Kristen Saloomey looks at how the 2008 Beijing Olympics is being used to try and change China‘s policies.

Thousands are expected to converge at Tiananmen Square later on Wednesday to witness the countdown clock reach the one-year mark, but the scene will be in stark contrast to those 18 years ago.

At that time, the square had a very different scene and the events have left a lasting impression about China‘s human-rights record – images that Beijing hopes to shake off before the games begin next August.

While the International Olympic Committee is full of praise for China, there’s little praise from activists who are using the games to highlight international concerns about the host nation.

Topping the list is China‘s record on child labour, followed by Tibet and Sudan.

Even though Chinese authorities arrested the culprits involved in cases of forced labour at the brick kilns, the problem still persists.

China is also under fire for its record on Tibet.

On Tuesday, protesters made their point at the Great Wall by unfurling a massive banner to highlight concerns about China‘s claims on the Himalayan region.

And then there’s Sudan, where China is the largest foreign investor. 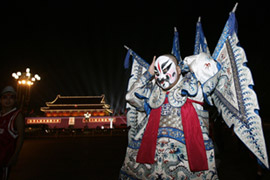 China’s policy on Tibet and Sudan are
constantly criticised [Reuters]

Human-rights groups want Beijing to use its relationship with Khartoum to help end the violence in Darfur.

When the 2008 Beijing Games opens in the National Stadium – nicknamed the Bird’s Nest – China will solidify its place on the world stage.

By spending over $40 bn on the stadiums and games, China is trying to build its stature as a free-market economy.

But with the prestige of the Olympics comes international scrutiny, and activists are already using the Summer Games to call attention to what they say are human-rights abuses in China.

And the government has started cracking down on dissent.

“We have seen an increase in arrests in the run up to the Olympics because they want to silence everyone who can speak up,” he said.

But grabbing the most attention is China‘s economic ties with Sudan, which some feel have stopped Beijing from doing all it can to end the humanitarian crisis in Darfur.

Actress Mia Farrow, who visited Darfur refugees, thinks targeting the Olympics is the only way to get the Chinese government to wield its influence. 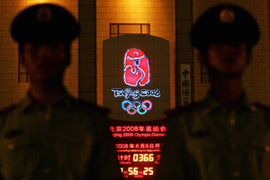 The government has started cracking down on
dissidents [GALLO/GETTY]

“There is one thing that Beijing holds more dear than its unfettered access to Sudanese oil, and that is the staging of the 2008 Olympic Games,” she said.

In the US, activists have been directing their ire at Chinese consulates, holding rallies and handing in petitions.

Chinese officials would not answer Al Jazeera’s questions on camera but in a written statement, the special representative on Darfur said none of these actions will affect the Games.

“One of the basic principles of the Olympic Games is to separate politics from sports. It’s fiddle-faddle to politicise China‘s hosting of the Olympics,” read the statement.

Some experts agree that if history is a guide, the protests will have little effect. 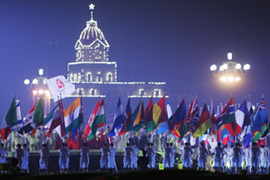 But some see China‘s approval of a recent UN peacekeeping mission to Darfur as evidence of international pressure already working.

Hollywood celebrities such as George Clooney have kept the focus on Darfur, joining fellow actors to donate $1m of film revenues to help refugees.

Steven Spielberg, film director, tapped to help design Beijing‘s opening ceremonies, has also threatened to back out if the government remains soft on Sudan.