The agency, which is co-ordinating relief work with the UN World Food Programme (WFP) and other agencies, said that about 15 to 18 per cent of the infants are malnourished

In some areas infant mortality is six to seven times the threshold normally used to denote an emergency.

Boubacar Diop, the WFP logistics chief in Cameroon, said: “This has been a major logistical challenge to reach so many people spread out across such a large area. Some of the roads are in very poor shape, too, and insecurity has been a constant worry.”

The Central African Republic, a landlocked former French colony which regularly comes at the bottom of most human development indices, has suffered decades of instability and military coups since it won independence in 1960.

The insecurity has been heightened by the spillover of conflicts from neighbouring countries.

These include those in Sudan’s Darfur region and Chad, where Darfur-based Chadian fighters campaigning against Idriss Deby, the country’s president, have used the Central African Republic as a staging post for attacks.

Humanitarian agencies estimate that 290,000 Central Africans have been displaced in the past 18 months, including 78,000 who have crossed into Cameroon, Chad and Sudan.

The International Committee of the Red Cross is one of the few agencies in the north-west of the Central African Republic. The UN suspended its work there after a French worker with Medecins Sans Frontieres was shot dead in June.

The UNHCR said there were fears that seasonal rains and banditry at the border could impede the distribution of food, blankets, mosquito nets and medicines.

But the operation began on time on Wednesday morning.

Jacques Franquin, UNHCR representative in Cameroon, said: “Distribution started at the Gbiti site, about 140km east of Bertoua … where there are 2,685 refugees, and at Ndokayo with 1,128 refugees.

“Several truck loads of aid have already left from these localities to neighbouring sites.”

The WFP is preparing 2,997 tonnes of cereals, pulses, vegetable oil, sugar and salt to supply the refugees for six months while Unicef, the UN children’s agency, will take care of malnourished children. 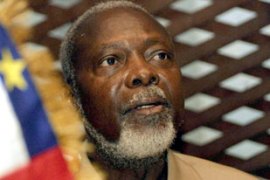