Rescue efforts suffered a setback overnight when dangerous conditions, including falling rock, forced the rescue teams at the Crandall Canyon Mine to retreat.

The miners are trapped 450m underground and are 610m from the closest access point. Rescuers have been using heavy drilling equipment and teams inside the tunnels to attempt to dig through to the men.

Murray said there were 30 pieces of mining equipment in place and 134 people dedicated to the rescue.

“They’re digging as much as they can, even with their hands,” Julie Jones, a city councillor whose son works at the mine, said.

The mine is built into a mountain in the Manti-La Sal national forest, 225km south of Salt Lake City.

US geologists have been investigating whether a 3.9 magnitude tremor recorded early on Monday morning was a result of the cave-in or an earthquake that could have caused the collapse.

Al Davis, district manager of the federal mine safety and health administration, said he would not speculate on the cause or effect of the collapse. His team was focused on the rescue operation and would complete an investigation later, he said. 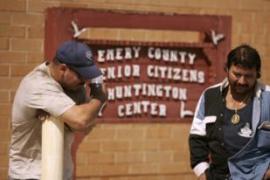