After more than 100 years of conflict, Laos has become the most-bombed country in the history of warfare.

The US dropped most of the five million bombs during the Vietnam War, but 30 per cent of them did not explode.

Xieng Khouang in Central Laos, is one of the worst-affected areas in the world. 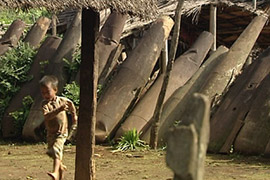 Children are most at risk of exploding UXOs

Thom, 13, can no longer run around and play with the other children. His leg was injured when a UXO found by his best friend exploded.

His friend was killed instantly but Thom, who was standing behind him, escaped. He still has shrapnel in his body as a grim reminder of the incident.

Xieng Khouang, where Thom lives, is one of the worse UXO-contaminated areas in Laos – the country with the highest number of unexploded ordnances in the world.

Thom says he feels lucky to be alive when most people die in such explosions.

King Phet, who grew up in Xieng Khouang during the Vietnam war, now works with a UN-sponsored group called UXO Lao.

The group aims to clear the country of leftover bombs.

But King Phet says it will take 400 years given the lack of equipment and trained personnel.

In the meantime, residents are learning all about the dangers of UXOs as part of an awareness campaign.

Yeng Vu, a farmer, says such talks are not very practical.

“It’s one thing to teach about UXOs now … but how is a little child to really understand the dangers?” he said. 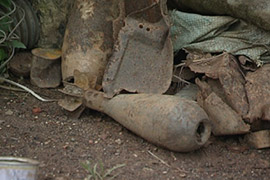 Yeng Vu and his wife just lost their five-year-old son to a UXO.

“It was awful … there was blood everywhere … his insides were out … the bomb broke him in pieces,” he said, blaming those who dropped the bombs in the first place.

But Laos will not be able to forget and has had to learn to live with UXOs by recycling disabled bombs and even trading scrap metal for much-needed cash.

Even children are learning new rhymes centred on the deadly objects.