Alonso had been punished late on Saturday after the FIA ruled that he had delayed Hamilton during their final pit stop in a qualifying session.

The FIA also ruled that any points won by McLaren at the Hungaroring circuit would only count towards the driver standings and not the constructor championship.

The Spaniard was defiant about the incident and said: “Without the penalty… victory would have been possible today as you can see on my lap times when I had a clear track. The fight for the championship is still open.”

McLaren admitted on Sunday that “tensions were undeniably high” during the qualifying session, but said it did not believe the sanctions were “appropriate”.

So while Hamilton extended his lead in the standings to seven points over Alonso, 80 to 73, Ferrari moved eight points closer to McLaren, cutting the British team’s lead to 138 to 119.

McLaren said it intended to appeal against the points ban, and has 48 hours after the race to present its case to the FIA’s court of appeal. It cannot appeal Alonso’s relegation.

With six races remaining, the team will have its hands full managing the two best drivers so far of the 2007 season.

In a statement McLaren said: “The process of managing two such exceptional talents as Fernando and Lewis is made more challenging by having a race-winning car.”

The strains in that task have become increasingly evident as the season has progressed.

Asked after the race about his relationship with Alonso, Hamilton said he continued to have respect for the Spaniard.

Hamilton said: “He doesn’t seem to have been speaking to me since yesterday, so I don’t know if he has a problem.”

The 22-year-old driver, taking part in his first Formula One season, said he felt a “big cloud” over him during the race.

He said: “It was difficult to stay focused because you had the feeling in the team that [McLaren] won’t get any points and you didn’t know whether the team hated you, [or] they just hated the situation.”

Dennis said: “It was a weekend full of stress and emotion. The issues that faced us … tested the resolve of the whole team. Both drivers did great jobs in difficult circumstances.” 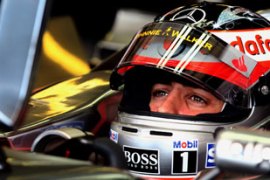 Defending world champion will start from sixth after holding up teammate.