Six others are being tried in absentia and face various charges including money-laundering and terrorism. The defendants deny the charges.

The prosecution submitted books, compact discs and computers as evidence. The defendants denied any knowledge of the items.

Some analysts see the current trial as an attempt by the government to put pressure on the group, which won one-fifth of the seats in parliament in 2005.

The trial will resume on August 19.

Police arrested 14 more members of the group for allegedly holding an unauthorised meeting on Sunday.

The Middle East News Agency said the members were arrested at a gathering in a village near the capital, Cairo.

The agency reported police as saying they found materials and documents relating to the group’s organisational affairs.

The number of brotherhood members now detained is at least 567.

The Brotherhood was banned in 1954 but fields independent candidates and seeks an Islamic state through democratic elections.

They say the government wants to stop the group from making further electoral gains that could help it mount a serious threat to the rule of Hosni Mubarak, Egypt’s longest-serving president, since the Albanian-born Mohamed Ali Pasha in the 19th century. 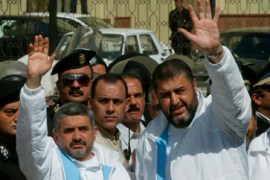