Hamilton, the 22-year-old rookie who is two points ahead of Alonso with seven races remaining, ended the afternoon session early after spinning off the track.

Another 22 year old, this time in the form of Poland’s Robert Kubica, returned to the track where he made his Formula One debut last year and was fastest in the morning with a lap of 1:22.390.

Ferrari’s Brazilian Felipe Massa was second in that session, ahead of team mate Kimi Raikkonen.

Massa is nine points adrift of Alonso while Raikkonen is 18 off the lead.

McLaren are 27 points ahead of Ferrari, with whom they are embroiled in an increasingly bitter spying controversy, in the constructors’ championship.

Kubica has bittersweet memories of last year’s race in Hungary, after being drafted in as a replacement for Canadian Jacques Villeneuve.

Kubica finished seventh in that race but was disqualified when the car was found to be underweight at the finish.

“Last year was a pretty up and down weekend for me here,” he said.

“This year I hope for a better weekend. The car is performing much better this year and we are looking pretty strong.

“And of course probably a lot of Polish fans will come so I’m really looking forward to it.” 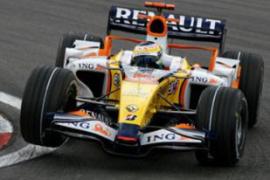