The security operations have drawn international condemnation, including from the European Union (EU).
The EU presidency said in a statement that it was concerned about recent arrests of leading activists and “condemns this decision to detain individuals who were exercising their right to peaceful demonstration”.
‘No law’
Su Su Nway, a member of detained opposition leader Aung San Suu Kyi’s National League for Democracy party, took part in Tuesday’s protest at a busy Yangon intersection, but escaped arrest.

She said many of her colleagues were beaten up and dragged into waiting cars.

“Peaceful protests are brutally cracked down upon and I want to tell the international community that there is no rule of law in Myanmar,” she said.
Unconfirmed reports said other protests took place on Wednesday in the central town of Meikhtila and in Sittwe, the capital of Rakhine State in western Myanmar.
About 20 members of the National League for Democracy marched in Meikhtila, and hundreds of people in Sittwe according to Mizzima News, an online news service operated by Myanmar exiles in India.
Activists in Myanmar reported that between 200 and 300 people took part in the protest in Sittwe on Tuesday.
Journalists targeted
Two media rights groups said on Wednesday that they strongly condemned heavy-handed tactics used by Mynamar’s security forces to prevent journalists from reporting on the protests.
“The military’s response to the wave of protests against price increases since August 19 has again been heavy-handed repression, intimidation and censorship of Burmese journalists,” Reporters Without Borders and the Burma Media Association said in a statement.
Security agents armed with spades and iron bars have been threatening and insulting journalists at the scene, the groups said.
Myanmar’s military leadership, which has been criticised worldwide for violating human rights, tolerates little public dissent.
In 1988, public protests over rising rice prices were violently subdued by the army, with thousands of people estimated to have been killed around the country.
The current protests are small in scale compared to the 1988 events, but are the best organised in a decade.
Source: News Agencies 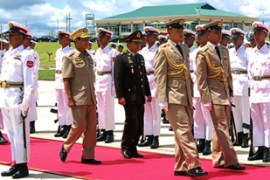 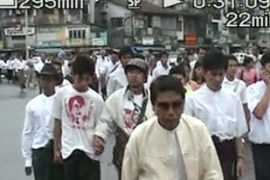 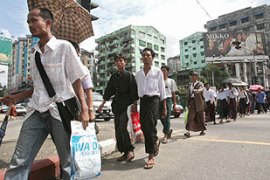 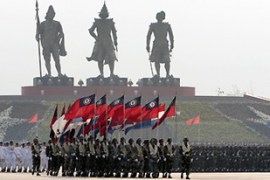