Speaking to Al Jazeera on Tuesday, Amanda Pitta of the UN’s humanitarian affairs coordination office in Bangkok said they were still waiting for a full assessment of needs to come in from the field.
In New York, another official said UN and European Union agencies are working closely with Pyongyang to bring urgent aid to flood victims in the country.
Margareta Wahlstrom, the UN deputy emergency relief co-ordinator, urged the international community to “respond swiftly and generously… to prevent further suffering”.
Priority areas

The UN has prioritised essential medicines, clean water and food for the worst-affected communities, with an estimated 170,000 people left homeless by flooding across the country.

The UN also called for support to ensure better disease surveillance and outbreak response.
“Assistance is needed immediately in order to ensure an early recovery of cereal production and thereby farmer’s ability to supplement winter crops,” it said in the appeal.
Flood-damaged schools are also expected to reopen in early September, the UN said in the executive summary..
Show cancelled
Meanwhile the flooding has forced the suspension of the country’s Arirang Festival, a large-scale gymnastic and artistic show stages by  up to 100,000 performers.
It was scheduled to run from August 1 to mid-October but was cancelled following the devastating floods.
The Korean Central News Agency said on Monday “now as the whole country is liquidating [in] the aftermath of a natural calamity, its continuation has become problematic”.
Source : Al Jazeera, News Agencies 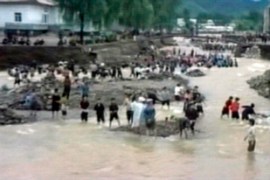 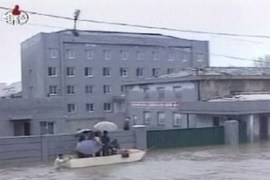