Stalling tactic
Some key Sunni figures on Monday dismissed the agreement as a stalling tactic by al-Maliki to ease pressure from Washington.

“Our position is that this meeting represents a new phase of procrastination and does not honestly aim at solving the problems quickly,” Khalaf al-Ilyan, a leader of the Sunni bloc, the Iraqi Accordance Front, said.

“I think that no real or practical solution will come out of this.”
Another Front leader, Adnan al-Dulaimi, said the accord included “good decisions that would serve the whole Iraqi people”.
“But we doubt that they will be implemented,” he said. “All our experience with al-Maliki indicates that this is another new set of delaying measures. They give you a glimmer of hope, but at the end of the day you get nothing but promises.”
US pressure
Ryan Crocker, the US ambassador to Iraq, has expressed frustration over the lack of movement towards political reconciliation among the Shia, Sunni and Kurdish factions, but called Sunday’s accord an “important step forward for political progress, national reconciliation and development”.
He attended Sunday’s meeting with al-Maliki along with Adil Abdul-Mahdi, the Shia vice-president, Tariq al-Hashemi, the Sunni Arab vice-president, Massoud Barzani the head of the northern autonomous Kurdish region and President Jalal Talabani, who is also a Kurd.
George Bush, the US president, also hailed the agreement, saying it “begins to establish new power-sharing agreements”.
“These leaders … recognise the true and meaningful reconciliation that needs to take place,” Bush said on Monday.
“Yesterday’s agreement reflects their commitment to work together for the benefit of all Iraqis to further the process.”

But the deal did not convince the main Sunni Arab political bloc to take back the government posts they abandoned this month over differences with al-Maliki, a Shia.

The Sunni walkout has paralysed the government ahead of a crucial report to the US congress by Crocker and General David Petraeus, the US commander in Iraq.
In a step towards implementing the deal, US and Iraqi officials announced on Monday that US-led forces would increase the number of detainees released during the Islamic fasting month of Ramadan, which begins in September.
They did not say how many would be freed.
Violence continues
Despite the show of unity on Sunday, violence across the country has continued.
Police and hospital officials said eight people – a family with five young children – were killed in Samarra on Sunday.
A firefight culminating in a US jet bombing a house where fighters had apparently taken refugee, left a dozen fighters and two soldiers dead, the military said.
Lieutenant-Colonel Michael Donnelly, a US military spokesman, admittetd there were reports of civilian casualties but said there were only two.
In al-Anbar province, a suicide bomber detonated an explosives belt among worshippers at evening prayers in Falluja, killing a cleric and eight other people, police said.
Source : News Agencies 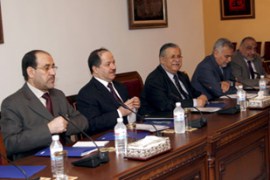