“It is the expected decision on this issue that will force the players to weigh their responsibility and organise themselves accordingly,” he said.

Sarkozy stressed that “Iraqi extremists must be marginalised,” that a “true process of national reconciliation” must be launched and a timetable for the military withdrawal spelled out in Iraq before France could play a useful role.

The address came after Bernard Kouchner, the French foreign minister, was forced to make an apology for suggesting that Nuri al-Maliki, the Iraqi prime minister, should stand down for failing to quell the violence in Iraq.

Kouchner, who visited Baghdad last week, apologised on French radio for his remarks.

“If the prime minister wants me to excuse myself for having interfered in Iraqi affairs in such a direct way, then I do so willingly,” Kouchner told French radio RTL.

“I believe that he [al-Maliki] did not understand, or that I did not stress enough, that these had been remarks that I had heard from my Iraqi interlocutors,” Kouchner said.

But at the conference of ambassadors on Monday, he appeared to backpedal when he told attendees that al-Maliki “may be leaving us soon”.

At the Paris conference, Sarkozy described Iran’s nuclear programme as “undoubtedly the most serious crisis before us today,” and said that France was determined to prevent Tehran from developing a nuclear bomb.

The French president said the threat of sanctions coupled with an offer of dialogue was the only way of avoiding what he called a “catastrophic alternative – an Iranian bomb or the bombing of Iran”.

“France will spare no effort to convince Iran that it has much to gain by engaging in serious negotiations with the Europeans, the Americans, the Chinese and the Russians,” he said.

The president also held out the prospect of improved relations with Syria if Damascus agrees to help break the current political crisis in Lebanon, France’s close ally in the Middle East.

Sarkozy said France would not allow a “Hamastan” to emerge in the Palestinian territories after the takeover of the Gaza Strip by Hamas group in June.

“We cannot resign ourselves to this outcome,” he said.

Avoiding a clash between Islam and the West was the “first challenge” facing French diplomacy in the 21st century and security agencies in Western governments must work in “total co-operation” to combat terrorism, he said.

Sarkozy underscored the importance of the Franco-US friendship but added that France was free to disagree with the US. “To be allied does not mean to be aligned,” he said.

His address drew criticism from Jean-Luc Melenchon, an opposition Socialist party senator, who accused Sarkozy of “aligning France with the world view upheld by President Bush [the US president] and American neo-conservatives”.

But the French leader also made the case for a “strong Europe”, saying France would in the coming months take “very strong” initiatives to build European defence and renew the Nato military alliance.

He said France would not block negotiations between the European Union and Ankara over Turkish membership as long as the 27-nation bloc engaged in a “vital reflection” on its borders. 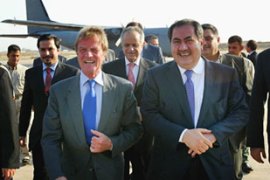 France ‘ready to be useful’ in Iraq

Visit is the first by a French minister to Iraq since the US-led invasion in 2003.