The organised crime group suspected of murdering her may also be linked to the murder of Andrei Kozlov, the central bank deputy chief, Chaika said.
He said: “We have evidence this group was involved in … the killing of Andrei Kozlov.”
‘Progress made’
“We have made serious progress in the criminal investigation of the murder of the journalist Politkovskaya,” Chaika told Vladimir Putin, the Russian president, on Monday.

“To date we have arrested 10 people. In the very near future they will be charged with committing this serious crime.”

Politkovskaya, a vocal critic of Putin and his government, was shot dead in the stairwell of her apartment building in central Moscow.

Jonah Hull, Al Jazeera’s correspondent in Moscow, said: “She was a massively admired figure here in Russia and internationally.

“Among independent media groups her death caused uproar … her writings were well known in Europe, the United Kingdom and the United States.”
Prosecutors said her killing was probably linked to her work.

Former colleagues of Politkovskaya at the Novaya Gazeta newspaper have said they suspect the murder was linked to a report she was preparing into allegations of torture in Chechnya.
She made regular trips to report on the Kremlin’s operations against Chechen fighters and her reporting attracted the attention of officials and the security forces.

On one trip to Chechnya, she said she was arrested and held in a pit in Chechnya for three days.

She also received numerous death threats.
Anna Usachyova, a spokeswoman for Moscow City Court, said a judge had approved the detention of eight people “on the basis of suspicion that they are connected to the murder”.
She did not give details on the other two suspects.
Putin said last December that everything possible was being done to find and punish Politkovskaya’s killers.

“The best professionals in Russia’s law enforcement are investigating this crime and we already have certain results,” he said.

A prominent campaigner for press freedom expressed scepticism that prosecutors were any closer to convicting Politkovskaya’s killers.

“The murders of journalists in the past 14 years have been so poorly investigated that it’s hard to have any faith in this,” Oleg Panfilov, head of the Centre for Journalism in Extreme Situations, said.
More than 80 journalists in Russia have been murdered because of their jobs since 1993, according to the International Federation of Journalists.
Panfilov said: “I suspect it’s connected with the fact that the one-year anniversary of [her] death is coming up.
“People will ask ‘Where are the killers?’, and this way they can say that the case is closed and suspects have been detained.”
Source : Al Jazeera, News Agencies 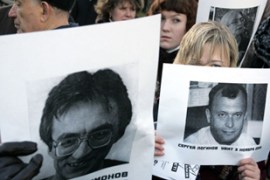