“I ask them to come to their senses and to talk in a respectful way about Iraq.”

He said it was not acceptable for the US military to kill civilians during raids, a complaint he has made before.

Al-Maliki appeared stung by the recent series of critical statements about his government, including one from George Bush, the US president, who said he was frustrated that al-Maliki had failed to make progress on political benchmarks.

But Bush also said that he backed the Iraqi prime minister.

Al-Maliki’s verbal counteroffensive comes days before General David Petraeus, the American commander in Iraq, and Ryan Crocker, the US ambassador, report to congress on progress in Iraq since the introduction of 30,000 more American troops.

US policy towards Iraq could reach a turning point when Crocker and Petraeus give their progress report.

Crocker has said that the Iraqi government’s progress was “extremely disappointing”.

Clinton, a leading candidate to succeed Bush as president, joined Levin, the head of the Senate’s armed services committee, in calling for al-Maliki to be replaced as prime minister for failing to reconcile Iraq’s sects.

US officials say that security is improving somewhat, but political reconciliation has stalled. Democrats, and some Republicans, want Bush to begin withdrawing troops soon.

Al-Maliki also told the French government to apologise for comments reportedly made by the foreign minister. Bernard Kouchner is alleged to have suggeted that the Iraqi leader should step down.

“We welcomed their foreign minister and we were happy with his visit, but they have to show us respect”

Al-Maliki said: “We welcomed their foreign minister and we were happy with his visit, but they have to show us respect.

“We call upon the French government to apologise about this issue.”

Kouchner visited Iraq this month in a highly symbolic gesture after years of icy relations with the US over its 2003 invasion of the country.

Kouchner said Paris wanted to “turn the page” and look to the future.

However, in an interview with Newsweek magazine, Kouchner said he told Condoleezza Rice, the US secretary of state, that al-Maliki has “got to be replaced”.

Tareq al-Hashemi, vice-president of the Iraqi Islamic party, had initially rejected overtures from the four leading parties in al-Maliki’s government, saying such alliances were not the answer to Iraq’s political crisis.

Al-Maliki said: “Today there will be a joint statement, not from only the four parties but also the Islamic party. There will be five parties, not four. This final statement will include a summary of all points of agreement.”

An employee in the Iraqi Islamic party’s media office, however, denied that the party had joined the alliance or had any plans to do so.

US president says he has confidence in Iraqi leader amid comparisons with Vietnam. 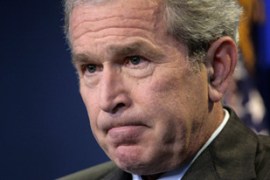