The hot-air balloon, which was operated by Fantasy Balloons Charters based in Langley, British Columbia, was one of several balloons in flight at the time.

Witnesses said passengers began leaping from the balloon when it rose to about six metres.

Roger Morrow, Surrey police officer, said the fire sent up a plume of smoke that could be seen for kilometres.

Betty Nicholson, a spokeswoman for the ambulances services, said three passengers had serious but non-life-threatening injuries.

She said the more seriously injured have burns and internal bleeding.

John K George, a spokesman for Fantasy Balloon Charters, said he does not know why the balloon caught fire shortly after take off.

He said: “The company deeply regrets this evening’s incident and all injuries associated with it (and) inconvenience to those people being displaced.”

The Transportation Safety Board of Canada is investigating.

A similar incident occurred earlier this month in the central Canadian province of Manitoba where 12 people were injured.

Bill Yearwood, an investigator with the Transportation Safety Board, told CBC News: “The operator had loaded 12 passengers and was preparing to launch the balloon when an uncontrolled fire erupted.

“The balloon was tethered at the time and the pilot instructed people to get out. It subsequently rose and the tether broke and it climbed before it collapsed and fell into a residential area.” 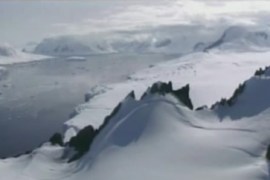 The race for oil in the Arctic

The Arctic is getting warmer but it’s politics is just about to get much cooler.