“I’m happy that the judiciary and the Islamic revolutionary court finally accepted the law and released my client on bail,” Ebadi said.

Esfandiari is director of the Middle East programme at the US-based Woodrow Wilson international centre for scholars, which describes itself as a non-partisan organisation dedicated to the study of domestic and international affairs.

They took her baggage, including her US and Iranian passports and, for several weeks, she was interrogated for up to eight hours a day.

Most of the questioning focused on the activities of its Middle East programme, the centre said.

As she left the prison, Esfandiari praised the staff and her treatment, even during the interrogations.

“The gentlemen that I had contact with regarding interrogation were extraordinary, polite and respectful,” she said.

“They treated me very well in the section. I had a room, it was very big, it had a window. I could have air whenever I wanted. The food was very good.”

Iran confirmed in May that it had detained Esfandiari and charged her later that month.

Hassan Hadad, Tehran’s deputy prosecutor, told the Mehr news agency on Tuesday that the investigation into Esfandiari and Tajbakhsh was not over, although no charges had been issued.

The Iranian intelligence ministry has accused Esfandiari of trying to set up networks with the ultimate goal of creating a “soft revolution” in Iran, along the lines of the revolutions that ended communist rule in eastern Europe. 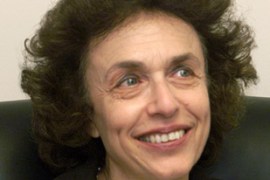