Malaysia will help train Thai Muslim religious teachers and provide scholarships for students in southern Thailand as part of an agreement signed between the country’s two leaders aimed at curbing violence in the region.

Surayud Chulanont, the Thai prime minister, is in Malaysia on a three-day visit to secure economic help for the south of the country.

Surayud signed the deal with his Malaysian counterpart, Abdullah Ahmad Badawi, on Tuesday in Putrajaya, the administrative capital of Malaysia.

According to Hishammuddin Hussein, Malaysia’s education minister who was speaking with the national Bernama news agency, the agreement will link the two countries’ education institutions especially in southern Thailand covering areas such as religious education, curriculum development and training.

More than 2,400 people have been killed in violence in Thailand’s mainly Muslim south since 2004.

Most of the violence has been in provinces near Thailand’s border with Muslim-majority Malaysia, and the government there is concerned it could destabilise the region.

About 100 Thai educators and religious teachers are expected to be sent to Malaysia at the end of this month for training, a Thai education official who declined to be named, said.

Surayud is being accompanied on his visit by an entourage including his foreign, defence, education and interior ministers.

Both Surayud and Abdullah are due to fly to the northern resort island of Penang on Wednesday for a meeting expected to focus on security and economic development in Thailand’s southern region.

Syed Hamid Albar, the Malaysian foreign minister, has said that the leaders were likely to discuss setting up an Islamic bank in southern Thailand, with the expertise provided by Malaysia’s central bank.

He has said talks would centre on education, employment and entrepreneurship opportunities for Thailand’s southern provinces, which are among the country’s poorest and have long complained of discrimination by the government.

Meanwhile as the talks took place in Putrajaya, violence continued in the south of Thailand on Tuesday as three people were killed in separate attacks believed to by carried out by Muslim separatists.

An unknown number of assailants shot and killed a Buddhist man in a security guard uniform in the Waeng district of Narathiwat province, according to Prakit Meekam, a police official.

He said the attackers then attempted to behead the victim before fleeing.

In a separate incident, a Muslim man who was recently elected village chief was killed in a drive-by shooting in the Raman district of Yala province.

The predominantly Muslim provinces of Yala, Pattani and Narathiwat and some parts of Songkhla have seen the worst of the fighting since early 2004, when a separatist movement flared up after a lull of more than two decades.

Along with attacks on soldiers and police, separatists have targeted Buddhist civilians and government workers in what is believed to be an attempt to drive them from the area. 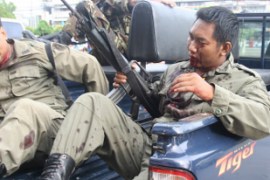 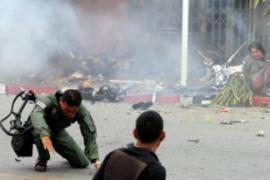 At least 18 hurt after police investigating one blast get caught by a second. 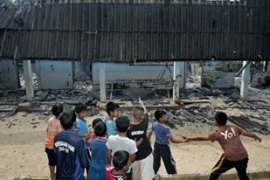 Bodies of two slain rangers and two civilians set on fire in the latest attack.