Food stockpiled
In areas such as Playa del Carmen, on Mexico’s popular Mayan Riviera holiday strip, tourists have been forced to huddle in shelters.
At one hotel, serving as a shelter for 400 people, as many as 12 people were sharing some rooms.


Emanuela Beriola, 41, an Italian tourist, said: “We could be two or three days without water or electricity.”

He has stockpiled tinned meat, energy drinks and cans of tuna fish.
Christian Muller, a German engineer who is on holiday in the area, said: “I’m not scared. I telephoned my daughter and my mother and they are more worried than me.”
Felipe Calderon, the Mexican president, says he is cutting short a trip to Canada to return home to oversee the response to the storm.
Al Jazeera’s Rob Reynolds, who is near the town of Tulum on the Yucatan peninsula, said: “The wind is quite strong and we ares still some distance from the centre of the storm.
“The emergency services have put police and military personnel on the streets and opened a lot of shelters.”
Belize braced
Mexico’s state-owned Pemex oil company abandoned its offshore oil rigs off the coast of Yucatan, evacuating more than 14,000 workers and shutting down production in its main oil-producing region.
Pemex warned that temporarily closing its 407 undersea wells would mean a production loss of 2.7m barrels of oil and 2.6bn cubic feet of natural gas a day.
Residents of Belize, south of Mexico, are also bracing for the brunt of the storm’s power.
Authorities have evacuated 6,000 people from the country’s main tourist resort, San Pedro on Ambergris Caye, and another 500 or so from nearby Caye Caulker, said Jan Mohammed, the national emergency coordinator.

Belize City’s three hospitals have moved high-risk patients to the inland capital, Belmopan, founded after 1961’s Hurricane Hattie devastated Belize City.
Devastation
In Jamaica, which has been lashed by the outer bands of Hurricane Dean since early on Sunday, residents were beginning a massive clean-up operation.

Scenes of devastation greeted Jamaicans on Monday and police reported that one man died after his house caved in on him.

Shara Barnett, a resident in East Kingston, told the Jamaica Gleaner that she and her family and neighbours were just glad to be alive.
“When the water started coming, we run out and went into the house opposite and when we in the house, the water just come in a storm surge of about 50ft,” she said.
Jamaica was placed on a state of emergency late on Sunday as Portia Simpson Miller, Jamaica’s prime minister, announced that security forces would be granted wider powers following reports of looting across the island.
Source: Al Jazeera, News Agencies 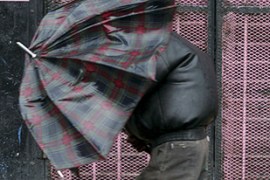 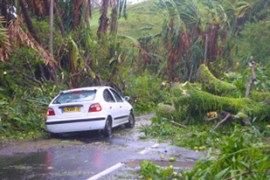