A dive in commodity prices hit nonferrous metals stocks, trading firms and other energy-related stocks, pulling the broader TOPIX index down to its lowest in nearly 13 months.

Hideyuki Suzuki, an investment information manager at SBI Securities, said: “Many manufacturers now make products outside Japan, but nonetheless a move in exchange rates does affect profit numbers and we have to watch out.”

Kikuko Takeda, a currency research manager at the Bank of Tokyo-Mitsubishi UFJ, said: “The market is in a state of panic with investors continuing to reduce risk with no idea when this is going to stop nor how serious the problems are.”

The yen was heavily traded by speculators and investors grappling with massive market moves the previous day.

The KOSPI index ended at 1,638.07 as foreign investors were again in selling mode following the decline of almost seven per cent the previous day.

Attention has now turned to European markets as they react to the losses. 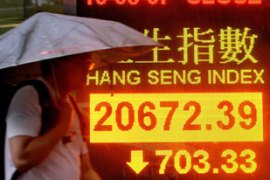 Investors still jittery despite Fed’s injection of $17bn, but blue chips bounce back.