Yusuf was from the same sub-clan as Ali Mohamed Gedi, the Somali prime minister.
Delegates at the talks said he had been playing a crucial role.

“Maalim Yusuf was a peace-loving elder. We will badly miss him. His death will negatively impact the talks,” Abdirahman Ahmed, one of the delegates, told Reuters. “This is a big blow to peace.”

Haji Abdi Iman, the senior delegate for the Hawiye clan, said: “I don’t care who committed this heinous crime but I can say this is a black day for the supporters of peace because he a dedicated negotiator despite his old age.”

Local residents have said that this was the first time a senior clan elder had been killed in living memory.

The capital had experienced a short period of relative calm after a security crackdown coinciding with the July 15 opening of the talks.

Mortars were fired at police who had taken up positions near a children’s hospital.

“Two guards and a man were wounded after mortars landed at the hospital. The insurgents attacked the police from two sides and we were caught in the middle,” a security guard said.

“The police responded with heavy artillery – it was really terrifying.” 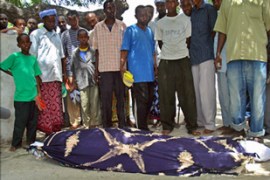 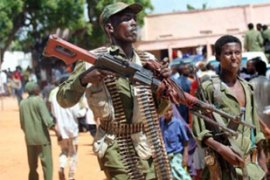