New alliance
The development came  after the country’s top Shia and Kurdish leaders formed a new political alliance on Thursday, but without Sunni leaders.

The talks began on Saturday, the official from Talabani’s office said.

“Yesterday the three-member presidency, the prime minister and Mr Massoud Barzani held a meeting to look into ways of solving outstanding issues and to decide on the summit,” he said.

The official described the weekend talks as “preparatory.”
Sunni boycott
The Sunni faction left al-Maliki’s Shia-dominated government on August 1, but he has said that the door remains open for their return.
On Thursday, Talabani and al-Maliki announced the formation of an alliance grouping the Shia Dawa party and Supreme Iraqi Islamic Council and the Kurdish factions of Patriotic Union of Kurdistan (PUK) and Kurdish Democratic Party (PDK).

But the National Concord Front, the main Sunni Arab political bloc in the country’s 275-member parliament, criticised the new tie-up as a “futile” exercise.

Speaking to Al Jazeera, al-Hashimi denied that Saturday’s meeting discussed the issue of his party, the Iraqi Islamic party, joining the newly formed four-party Shia-Kurdish alliance.
“The four-party alliance will actually add nothing to the political process, as these four parties are already [taking part] in authority and had very old strategic alliances even before the fall of [Saddam Hussein’s] regime,” he said.
“I affirm, through Al Jazeera, that the Iraqi Islamic Party does not currently have the intention to join the four-party alliance.
Gradual troop cut
In another development, the New York Times reported on Saturday that George Bush, the US president, intended to announce in September plans for gradual troop reductions from Iraq – but at levels far short of those sought by his congressional critics.
One US administration official made it clear that the goal of the planned announcement was to counter public pressure for a more rapid reduction and to try to win support for a plan that could keep American involvement in Iraq on “a sustainable footing” at least through the end of the Bush presidency.
Meanwhile, in continued violence, at least 10 people were killed and 28 others injured on Sunday when mortar shells landed on a residential neighbourhood in east Baghdad, Iraqi police said.
Women and children were among the dead and a number of houses were damaged in the attack, police said.
Source: Al Jazeera, News Agencies 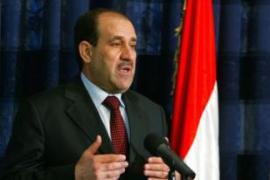