“We are just going to assess the situation and we hope to resume the supplies as soon as we can,” Antonia Mochan, a European Commission spokeswoman, said.
The EU provides the funding under a temporary system set up to prevent directly financing the Hamas movement which took full control of the Gaza Strip after clashes with security forces loyal to the Palestinian president two months ago.

Dor Alon, the Israeli energy company that delivers the fuel said that the EU “told us not to deliver because there is no guarantee that we will receive payment for today’s fuel”.

The EU Commission spokeswoman said that “we understand that there are enough stocks to continue production for a few days,”

She also said that the organisation was not the only fuel provider to the plant as it only supplied around 25 per cent of its needs.

Nour Odeh said: “Gaza City, the beating heart of the of the Gaza Strip, is most severely hit by the power outage.”

“The residents were used to some power outages, especially after Israel bombarded the power station one year ago … but they are not used to having only eight hours of electricity a day.”

Hamas assumed control of the power plant several weeks ago after it arrested Suleiman Abu Samhadana, the head of the Palestinian energy company.

Riyad al-Malki, information minister in the Ramallah-based government set up by the Mahmoud Abbbas, the president, after he dismissed the Hamas-majority cabinet, said Hamas was to blame for the blackouts.

“We warned for weeks that Gaza would fall into darkness if Hamas does not stop occupying the electricity company and does not stop holding on to millions of shekels that they collected from the people of Gaza,” he said.

“The people in Gaza, in every home and every house, must go into the street and say to Hamas ‘you are responsible for this crime.'”

In Gaza, Hamas’s parliamentary bloc responded by blaming their rivals in the West Bank.

“President Abbas and the Fayyad government are responsible for this criminal cut in electricity,” it said in a statement. “We call on people to protest against his act.”

“We call on the European donors to reconsider their decision, which was made because of lies and political provocation by the government,” it said. 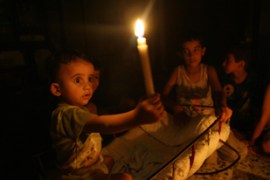 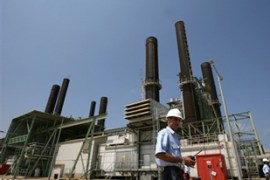 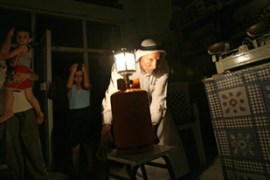