Twenty-three Christian volunteers from South Korea were taken from a bus as they travelled on the main road south from Kabul last month.

On Monday, two female hostages who had fallen ill were released in what the Taliban called “a gesture of goodwill” after face-to-face talks with a South Korean delegation in Ghazni province.

But on Saturday, Yousuf said that talks broke down on Thursday – the day they were reported to have resumed – and it would be unlikely more would be held.

“I don’t think [further] talks will yield anything. I am awaiting for the decision [on the hostages fate] from the leadership council,” he said.

Two men with the South Korean group have been shot dead by their captors, and the Taliban have threatened to kill the rest if their demands for a prisoner exchange are not met.

Yousuf Ahmadi, another Taliban spokesman, said talks would only resume “if they are ready to discuss the release of prisoners”.

Hamid Karzai, the Afghan president, has ruled out any swap after being criticised for such a deal in March to secure the freedom of an Italian journalist. He now says an exchange would encourage more kidnappings.

Seoul has repeatedly pointed out that it has no ability influence Kabul over the release of jailed Taliban fighters.

The abduction of the German woman came about a month two German aid workers and five Afghan colleagues were seized by the Taliban in Wardak province, southwest of the capital.

One of the German men was found dead with gunshot wounds while the other, along with four Afghans, are still being held. One of the Afghans managed to escape.

Zalmai Oriakhail, deputy police chief general in Kabul, said the woman seized on Saturday was walking with her husband when she was taken.

“They managed to force the woman into their vehicle, but they have failed to kidnap the husband,” Oriakhail said, adding that police had cordoned off the area and were searching for the kidnappers.

Most kidnappings in the capital are carried by criminal gangs and the majority of foreigners taken in recent years have been released unharmed after the apparent payment of ransoms. 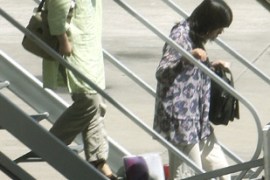 Two women arrive back in Seoul but 19 hostages still held captive by Taliban.