The women were brought to the arranged meeting point on the side of a road in rural Ghazni province by Haji Zahir, an Afghan man, who also got into the Red Cross vehicle with the freed hostages.

The handover is the first significant breakthrough in a hostage drama, which took a downturn in late July when two male captives were executed.

Melissa Chan, Al Jazeera’s correspondent in South Korea, said the families of the two hostages were notified of the anticipated release.

The women, who the Taliban has said are ill, were among 23 South Koreans kidnapped by Taliban fighters on July 19.

Taliban fighters seized the group – working in Afghanistan as volunteers with a Christian group – while they were travelling by bus from Kabul to the southern city of Kandahar.

A Taliban spokesman said the decision to free the pair had been made by the Taliban leadership council, headed by Mullah Mohammad Omar, as a gesture of goodwill towards the Korean people and South Korean diplomats negotiating for the hostages’ release.

Qari Yousef Ahmadi, the Taliban spokesman, said on Sunday that the two women would be released in part because they were sick and because face-to-face negotiations, which began on Friday, were going well.

Two Taliban leaders and four South Korean officials met on Friday and Saturday for direct talks over the fate of the hostages.

Taliban leaders have demanded that 21 Afghan prisoners be released in exchange for the remaining South Korean hostages, otherwise the latter will remain in custody.

The Taliban had initially promised to release the two female hostages, who are said to be in poor health, on Saturday, but said the delay was due to transport problems.

Nolan said the Taliban had told him early on Monday that the hostages are “very close” to the drop-off point and that “it will happen very soon”. 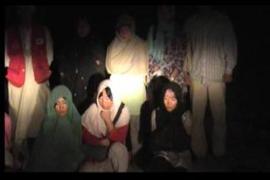