Nasrallah’s speech was the third public address he has made in recent weeks to mark the August 14 anniversary of a UN-backed ceasefire that 34-days of war with Israel.
He said the US and Israel tried to split the Lebanese along sectarian lines during the war.
US, Israel blamed
Nasrallah said: “[America and Israel] wanted to tear us apart. They wanted to use war to isolate us one country after the other, one people after the other, one sect after the other and one party after the other.
“The most serious accusation was the sectarian issue. They told the Christians that the fighting was with a Muslim group and that it has nothing to do with you. They told Sunni Muslims that the fighting was with a Shia group and was targeting the Shia project [in the region].”
The US calls Hezbollah a terrorist organisation for attacking Israeli troops that occupied southern from 1982 to 2000.
Nasrallah has not appeared in public since September 22, 2006, when he made a speech in the same neighbourhood to proclaim victory following the ceasefire agreement.
War casualties
Israel’s war with Hezbollah resulted in the deaths of more than 1,200 Lebanese civilians, a third of them children, and 160 Israelis, mostly soldiers.
Israeli air raids on Lebanon destroyed more than 25,000 homes and 50,000 other buildings, notably in the country’s south, by the time the ceasefire was agreed.
Israel failed in both its stated aims for its campaign against Hezbollah – namely to stop rocket fire on northern Israel and to recover two soldiers captured by Hezbollah in a cross-border raid.
Source : News Agencies 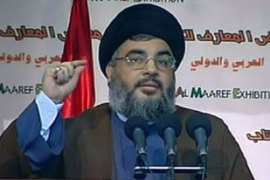 Sheik Hassan Nasrallah, the leader of Hezbollah, has said he does “not regret” the capture of two Israeli soldiers that led to Israel’s offensive against Lebanon.

Nasrallah says he did not want war

The leader of Hezbollah has said that he would not have ordered the capture of two Israeli soldiers had he known that it would trigger such a war.