But Singh, in a speech in parliament that was drowned out by the din of opposition protests, said on Monday that he had redeemed a pledge to secure the best agreement.
‘Good for India’
The pact finalised last month was “good for India, and good for the world”, he declared. “I am neither given to exaggeration, nor am I known to be self-congratulatory,” Singh said reading from a text.
“I will let history judge. I will let posterity judge the value of what we have done through this agreement.
“When future generations look back, they will come to acknowledge the significance of this historic deal,” he said.
“It is another step in our journey to regain our due place in global councils.”
The nuclear deal aims to give India access to US nuclear fuel and equipment for the first time in 30 years to help meet its soaring energy needs, even though it has stayed out of non-proliferation pacts and tested nuclear weapons.
First agreed in principle two years ago, the framework deal was approved by the US Congress last December and the pact that governs nuclear trade between the two, called the 123 agreement, was finalised last month.
Too many compromises
The 123 agreement has to get the backing of the US Congress after India secures other international approvals.
Critics in both countries say their governments are making too many compromises in their eagerness to seal it.
On Monday, noisy protests erupted in the lower house of parliament hours before Singh’s statement, forcing the chambers to be adjourned briefly.
Opposition politicians again trooped to the centre of the house as Singh began speaking, raising their fists in the air and shouting: “Scrap the nuclear deal”, “It’s a fraud, it’s a fraud” and “We don’t want to become American stooges”.
Last week, Singh dared the government’s communist allies, whose support is crucial for the survival of his coalition, to withdraw support after they had rejected the deal and asked him to scrap it.
Source: News Agencies 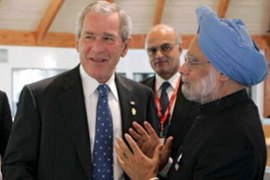 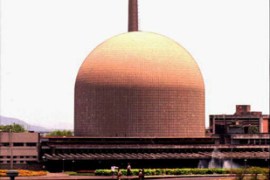 India and US finalise nuclear deal

India is not required to sign up to the nuclear nonproliferation treaty.