The American Civil Liberties Union has led the lawsuit on behalf of other groups including lawyers, journalists and scholars it says have been handicapped in doing their jobs by government monitoring.

However, Judge Julia Smith Gibbons, one of the appeals court’s Republican appointees, said that the plaintiffs did not have standing or the legal right to sue.

She said the plaintiffs failed to show they were subject to the surveillance and therefore do not have standing for their claims.

Melissa Goodman, ACLU lawyer, said the decision effectively protects the wiretapping programme, which was abandoned in January, from any judicial review.

“The Bush administration is basically left free to violate an act of congress with impunity – the foreign intelligence surveillance act, which congress adopted over 30 years ago to prevent the executive from engaging in precisely this kind of unchecked surveillance,” Goodman said.
“They are effectively saying you can’t show that you’ve been wiretapped and you’ll never be able to show that you’ve been wiretapped because the whole thing is so secret.”

The dissenting voice on the three-member panel, Judge Ronald Lee Gilman, a Democratic appointee said he would uphold the ruling on the grounds that the programme violated the intelligence surveillance act law of 1978.

A US district court in Detroit, Michigan, ruled in August last year that the programme violated the US constitution and the 1978 law prohibiting surveillance of US citizens on US soil without the approval of the special surveillance court.

The Bush administration appealed, and a court in Cincinnati set aside the judge’s decision. If the ACLU does not appeal the ruling, the case will be sent back to the judge in Michigan for dismissal. 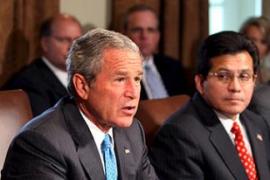 George Bush, the US president, has defended his domestic spying programme, saying it is limited.

US opens inquiry into spying leak

The Justice Department has opened another investigation into leaks of classified information, this time to determine who divulged the existence of the president’s secret domestic spying programme.

Lawyers for an Islamic scholar and a Lebanese-born Palestinian computer programmer want US federal judges to determine whether evidence used against their clients was gathered by a secret domestic spying programme.