Kamal Shah, Pakistan’s interior secretary, told the AFP news agency that police had surrounded a house and recovered a 12.7mm anti-aircraft gun and a 7.62mm machinegun modified for the same purpose from the roof.

He said the machinegun had been fired and said bullet marks had only been found on the wall, “which would suggest it was accidentally fired, forcing the suspects to flee and leave behind the weaponry.”

“The president’s plane cannot be the target because the firing was heard a long time after the president had left for Turbat. There were several other flights also,” Shah said.

But intelligence officials insisted that Musharraf was the target and that the couple who rented the house had fled since the attack.

“It was an unsuccessful effort by miscreants to target the president’s plane,” a senior security official told The Associated Press on condition of anonymity

The guns were “similar to those used by the Taliban in Afghanistan,” another official said.

Musharraf was flying from the Chaklala military base to the southern provinces of Sindh and Baluchistan to visit people affected by recent floods, the military said in a statement.

He has survived several attempts on his life since he took power in a military coup in 1999. In December 2003, Musharraf escaped a bomb blast which destroyed a bridge minutes after his motorcade had passed and a suicide truck bomb attack.

Elsewhere in Pakistan, up to five soldiers were killed when a suicide bomber on a bicycle struck a military convoy in Chakdarra, about 200km north of Peshawar, the capital of North West Frontier Province, officials said. 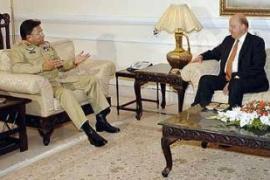 Senior official says it is for Pakistan president to decide when to quit as army chief. 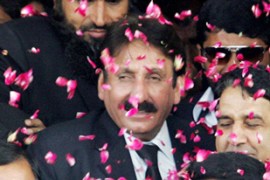 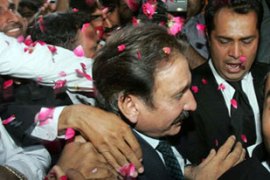 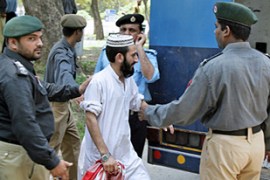