Farooq Anwar, a city police official, said security forces responded to shots fired from the mosque compound, but he had few details.

Police were using loudspeakers to urge the remaining people holed up in the mosque to surrender.

Tariq Azim, the deputy information minister, said all women and children would be granted amnesty, but men involved in killings and other crimes as well as top mosque leaders would face legal action.

Durrani said there could be “a few hundred” or more people remaining inside the mosque complex.

One who decided to give up, 15-year-old Maryam Qayyeum, said those who stayed in the madrassa or religious school, “only want martyrdom”.

Pervez Musharraf, Pakistan’s president, said each of those who surrendered would receive 5,000 rupees ($83).
‘Unusual demeanour’

Television footage showed security officials dragging Aziz towards a black car before he was driven away. Officials said he was caught in a screening centre set up to check people leaving the mosque.

“He was the last in a group of women all wearing the same clothes. He was wearing a burqa that also covered his eyes,” a senior security official told AFP.

“Our men spotted his unusual demeanour. The rest of the girls looked like girls but he was taller and had a pot belly.”

Helicopters continued to fly overhead and troops in armoured personnel carriers held their positions as police enforced a curfew imposed after clashes on Tuesday left up to two dozen people dead.

As the first deadline passed on Wednesday morning, Abdul Rashid Ghazi, the brother of the captured cleric, said he was prepared to talk with the government but added: “We will continue to defend ourselves”.

He said the mosque had enough supplies to carry on “until God wants”.

But the government said it would not open dialogue with the mosque’s clerics.

“The prime minister made it clear that time for negotiations with the management of Lal Masjid had lapsed due to the obstinate and uncompromising attitude of the Ghazi brothers,” the government said.

In recent months, the Lal Masjid has been put under increasing pressure by Pakistani authorities.

The mosque started an anti-vice campaign in Islamabad six months ago, with its students abducting women they saw as having carried out immoral acts. Musharraf has also accused the mosque of sheltering al-Qaeda members.

About 5,000 students, most from poor areas of Pakistan, are registered at the mosque and its affiliated schools.

Elsewhere in Pakistan, at least 12 people have been killed in attacks on security forces.

A suicide bomber drove his explosives filled car into a military convoy, killing himself and eight others in the northwestern town of Bannu.

Later, four bystanders were killed and a senior police official and his guard wounded in a bomb blast in the Swat region

It is not known if the attacks were linked to the siege at the Red mosque. 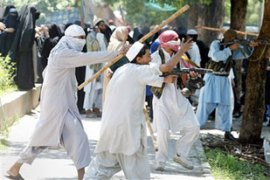 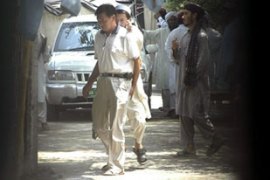 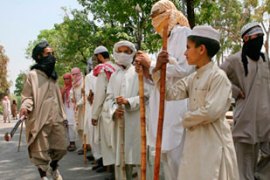