Johnston’s captors had declared themselves to be the Army of Islam, a previously little known group with links to the powerful Dughmush clan.
Johnston arrived in Jerusalem after being freed early on Wednesday from what he described as “an appalling experience, saying it was “an amazing thing to be free”.
Johnston ‘frail’
Al Jazeera’s Nour Odeh said Johnston had been freed by his Army of Islam captors but looked frail and had lost a lot of weight in his nearly four months of captivity.
She said his release came after lengthy talks and strong pressure by Hamas on the Army of Islam group.
“It is just the most fantastic thing to be free,” Johnston told BBC from Gaza, adding that it was “at times quite terrifying” not knowing when it was going to end.
“I dreamt many times of being free and always woke up back in that room … It’s an amazing thing to be free,” Johnston said at the home of Ismail Haniya, the former Palestinian prime minister and local Hamas leader who had brokered his release.
Johnston called his 16 weeks in captivity the worst of his life and likened his experience to being “buried alive”.
‘Double standards’
But he said he had followed events on a radio during most of his time as a hostage and thanked people around the world for what he called a psychological boost from their support.

Johnston praised Hamas for winning his freedom. “If it hadn’t been for that real serious Hamas pressure, that commitment to tidying up Gaza‘s many, many security problems, then I might have been in that room for a lot longer,” he told a news conference.

Asked if he would return to Gaza, Johnston said: “I spent three years covering Gaza as a correspondent and I spent four months in solitary confinement there, and I feel – enough already with Gaza.

Johnston was the only Western correspondent working full-time in the coastal enclave when he went missing on March 12 after his car was found abandoned.

The annual award was announced on BBC television and Johnston had been chosen as the winner before his kidnapping.
‘It’s incredible’
Johnston’s parents said they were relieved to hear that their son had been freed.
“We’ve seen him on the box, and it’s just incredible. It’s been a long 114 days,” Graham Johnston, Alan’s father, said.
The BBC said in a statement it was “extremely relieved”.
The Army of Islam had issued web videos showing Johnston and seeking the release of Islamists held prisoner by Britain and other states.
Johnston was pictured wearing a suicide vest with the warning that he would die if Hamas officials acted on their threat to free him by force from the clan’s stronghold.
Hamas had increased pressure on the hostage-takers to relent and had surrounded the group’s neighbourhood late on Tuesday.
Hamas takes credit

Khaled Meshaal, the group’s exiled leader, told Reuters from Damascus: “The efforts by Hamas have produced the freedom of Alan Johnston.”

Hamas fighters surrounded the area of Gaza City that is the base of the Dughmush clan, one of whose leaders, officials say, is also a leading figure in the Army of Islam.

It also exchanged prisoners with the group in recent days during negotiations to free Johnston.
Hamas seized control of Gaza last month after its forces defeated those of Mahmoud Abbas, the Western-backed Palestinian president.
Abbas responded by dissolving the unity government he had run with Hamas and appointing an emergency government that has attempted to isolate the movement.
Source: Al Jazeera, News Agencies 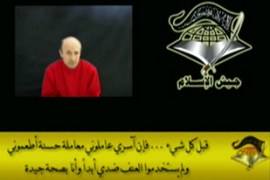 Alan Johnston criticises UK policies and says his captors are treating him well. 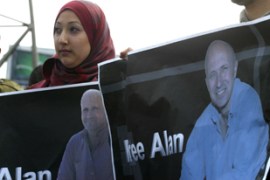 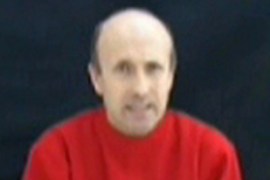 Hamas says arrest of Army of Islam spokesman not linked to bid to free reporter.