Nelson told the Australian Broadcasting Corporation that Australia’s priorities were set out in a defence and security review being released on Thursday “and resource security is one of them”.
US ‘prestige’
He said: “Obviously the Middle East itself, not only Iraq, but the entire region is an important supplier of energy, oil in particular, to the rest of the world.
“… it’s extremely important that Australia take the view that it’s in our interests, our security interests, to make sure that we leave the Middle East, and leave Iraq in particular, in a position of sustainable security.”
Nelson also said it was important to support the “prestige” of the US and UK.
“We’re also there to support our key ally – that’s the United States of America – and we’re there to ensure that we don’t have terrorism driven from Iraq which would destabilise our own region,” he said.
Howard criticised
His comments contrast with those made by John Howard, the Australian prime minister, on the eve of the Iraq invasion in Frebruary 2003 when he denied the war was linked to oil.

He said at the time: “It [the war] is about the danger to Australia if countries like Iraq continue to have chemical and biological weapons, and those weapons get into the hands of international terrorists – that fundamentally is what this is about.”

The opposition Labor Party, which wants to withdraw Australia’s troops from Iraq, said the government’s admission contradicted its statements before the invasion.
Kevin Rudd, the opposition leader, said on Thursday: “When Mr Howard was asked back in 2003 whether this war had anything to do with oil, Mr Howard said in no way did it have anything to do with oil.
“This government simply makes it up as it goes along on Iraq.”
China ‘threat’
Meanwhile, John Howard said on Thursday that China’s rapid military expansion risked causing greater instability in the region.
“The pace and scope of its military modernisation, particularly the development of new and disruptive capabilities such as the anti-satellite missile, could create misunderstandings and instability in the region,” he said at the launch of the new defence paper.
Beijing has overtaken Japan as Australia’s top trading partner and Canberra has been reticent to comment on China’s military and economic development.
But with Washington viewing Canberra’s close relationship with Beijing with some concern, the document launched by Howard brings his government into closer step with Japan and the US – both partners with Australia in security pacts.
Howard, who has committed Australia’s military to a $43bn build-up, said Canberra had buried the “self-defeating” idea that Australia’s military should be based on home defence.
“It needs to be able to defend our mainland and approaches in the unlikely event these ever come under direct military threat.
“But it must also be capable of conducting substantial operations in our immediate region, whether alone or as the leader of a coalition, and of making meaningful military contributions as a member of coalitions further abroad.”
Source: News Agencies 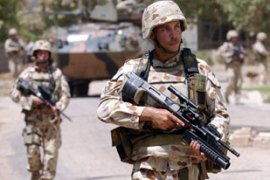 Defence minister says Australia will not reduce troops or set time for pull-out.