“Because the court concludes that it lacks personal jurisdiction over the identified defendants, it does not reach or address the merits of the other arguments raised,” she said.

The class-action suit was filed in Miami by the parents of about 10,000 child jockeys mainly from Pakistan, Bangladesh, Sudan and Mauritania.

The children and their parents do not live in the US and the races took place in several Gulf nations for decades.

The case was brought under a 200-year-old law known as the Alien Tort Statute which allows foreigners to sue in US courts in certain circumstances.

The plaintiffs had sought damages from Sheikh Mohammad, his brother Sheikh Hamdan and other unnamed persons who allegedly kidnapped and enslaved children, in some cases as young as two, to be used on the camel-racing circuit. 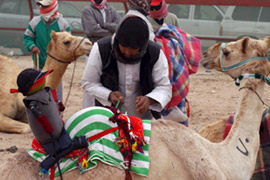 Robots have been introduced to
replace children as jockeys [EPA]

On Monday, Habib al-Mulla, a spokesman for the emir, said they were “gratified” by the judge’s “careful legal analysis and ruling”.

Earlier this year, Sheikh Mohammad had appealed directly to George Bush, the US president, to intervene. The state department said the two sheikhs enjoyed diplomatic immunity.

Sheikh Mohammad is also vice-president and prime minister of the UAE while his brother serves as UAE’s finance and industry minister.

The defence had argued that the interests of former child jockeys were best served through an existing programme to send them back to their home countries and compensate them there.

The United Arab Emirates (UAE), of which Dubai is a part, banned the use of child jockeys last year.

It has sent more than 1,000 of them home and replaced them with remote-controlled robots.

The UAE has also committed to providing the funds for the compensation of the former camel jockeys in Bangladesh, Mauritania, Pakistan and Sudan.

Al-Mulla said the lawsuit had drawn attention away from efforts by the UAE and Unicef “to provide life-changing social services and financial compensation to boys formerly employed as camel jockeys”.

But the parents say the programme did not provide for any punishment against individuals responsible for enslaving children.

The defence said the four countries of origin of the camel jockeys agreed that it should be the “exclusive remedy”, and pointed out that Unicef supported the efforts. 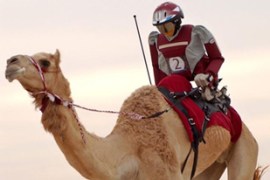 Unicef confirms children no longer being used as camel jockeys in the UAE. 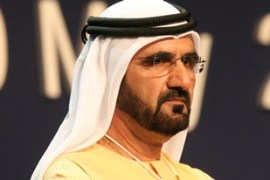 US lawsuit alleges Sheikh Mohammad and others enslaved children as camel jockeys.

A lawsuit accusing rulers of the United Arab Emirates of enslaving and forcing tens of thousands of young boys to work under brutal conditions as camel jockeys over the past three decades has been filed in the US.

Remote-controlled robot jockeys have made their debut as camel riders in the United Arab Emirates, competing in a trial race after the Gulf Arab state tightened a ban on child jockeys.