He met Guillaume Soro, formerly the civil war leader of anti-Soro New Forces. Soro was appointed prime minister in April under the latest plan to reunite the country.
A number of leaders from other African countries, including Thabo Mbeki, the South African president, joined Gbagbo and Soro to celebrate the peace accord.
Blaise Compaore, the president of neighboring Burkina Faso, where the peace accord was signed, was also expected to attend.
Peace deal
The gun burning ceremony is meant as the symbolic start of the disarmament process, the details of which still have to be agreed on by Soro’s New Forces fighters.
Thousands of people massed around Bouake’s main sports stadium hoping to get inside for the gun-burning ceremony.
Security was tight, with government army soldiers, distinguished by bright orange bands on their shoulders, mixing with the New Forces fighters.
The peace deal has seen some criticism, especially in Bouake where some of the New Forces did not back the accord.
In June, unknown assailants attacked Soro’s plane, shooting at it as it tried to land in Bouake.
The latest peace agreement was reached in March this year, after years of unrest and two failed peace deals. A key provision calls for elections to be held next year.
Source : Al Jazeera, News Agencies 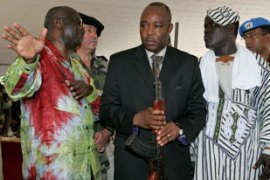 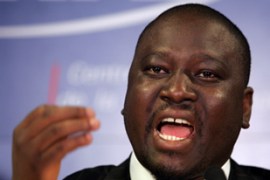 Guillaume Soro escapes unhurt but three others are killed in rocket attack.