“We apologise for this,” he said. “I would have loved to do a lot more.”
Currently 44 per cent of Peruvians live poverty. In his speech, Garcia said that increased public investment would bring that figure down to 30 per cent and “change the social face of Peru”.
He said the government would build housing for 1.2 million Peruvians by the time his term ends in 2011.
Garcia’s first government in the 1980s neary left Peru bankrupt and mired in hyperinflation, but got a second chance at running the country last year, pushing a market-friendly agenda.
High metal prices have helped and Peru’s economy grew 8 per cent in 2006, its eighth consecutive year of expansion.
Protests
In July, though, farmers, unionists and teachers called for a better distribution of wealth and held demonstrations that blocked roads and closed airports.
“They’re not making us a priority,” said Jorge Quinto Palomares, a regional government official in Peru’s in rural highland.
“The Huancavelica hospital is the only one in the region. The equipment is more than 50 years old.”
Gustavo Gorriti, a political analyst, said: “In our situation of growth in the midst of great poverty, deep inequality and terrible distribution of wealth, a certain level of tension, protest and conflict is unavoidable.”
In the June 2006 runoff elections, Indian and mestizo, those of mixed heritage, had voted overwhelmingly for Ollanta Humala, Garcia’s opponent who had promised radical redistribution of wealth.
But Garcia won the election, exploiting voter fears about Huamala’s ties with Hugo Chavez, the Venezuelan president, and casting himself as the region’s market-friendly alternative.
He slashed officials’ salaries, including his own, to much acclaim but his popularity has since fallen.
A recent poll by Apoyo, Peru’s top pollster, showed Garcia’s popularity had dropped to just 32 per cent in mid-July from 63 per cent last August.
Source: News Agencies 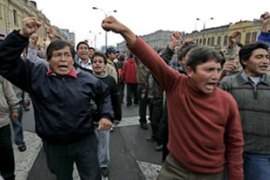 Demonstration against government social policy in south of the country turns ugly. 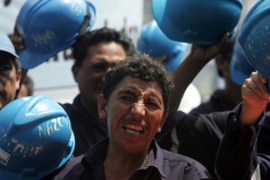 Once reviled for leading Peru to economic ruin, Alan Garcia, 57, has reinvented himself as a moderate politician dedicated to social change but aware of financial realities.