Goal-shy South Korea have prevailed 6-5 in their third penalty shoot out of the Asian Cup to take third place in the Tournament over Japan thanks to a decisive penalty save from well practiced goalkeeper Lee Woon-jae.

Perhaps incredibly a side which was unable to score in their last 416 minutes of football is now deemed the third best side in the Asian confederation with their place assured in the 2011 event.

Not since Kim Jung-woo’s goal in the first half of their final group match against Indonesia have the Taeguk Warriors celebrated a goal, but that looked like it might change early in the first half of the playoff with a number of half chances falling the way of Pim Verbeek’s men, but the scoreboard attendant need not have been concerned.

Just before half time Japan fashioned their first real chance when a corner fell to Yuji Nakazawa, but Lee pulled off a tremendous reflex save to stop Nakazawa’s volley from point blank range.

The chances of South Korea getting that elusive goal were dramatically reduced in the 56th minute, when referee Ali Al Badawi sent off center-back Kang Min-so for a second yellow card.

The decision by the United Arab Emirates official was a harsh one with the young Korean making minimal contact with Japan striker Naohiro Takahara in a contest that barely deserved a foul let alone a caution.

The fallout continued from the incident as well with South Korea manager Pim Verbeek and one of his assistants also banished to the stands for vigorously questioning the decision and perhaps a few other things relating to Mr Al Badawi.

But anyone who thought the man advantage might bring a flood of goals to Japan was left sorely disappointed with the side in blue barely able to fashion a chance for the remainder of the match.

Substitute Hanyu had a low shot blocked by Lee in the 73rd minute, and then Hisato Sato shot narrowly wide with the last kick of regulation time.

The most exciting moment of extra time was the pushing and shoving just before the interval that involved almost every player on the pitch after an off-ball clash between Shunsuke Nakamura and Lee Chun-so.

In the final moments of extra time, Japan nearly had their winner when Hanyu shot straight at a defender on the line when it looked easier to score before Sato forced a low save from the impressive Lee.

In the penalty shootout, both Japan and South Korea shot perfectly from the spot to take the tally to 6-5 when Hanyu, somewhat predictably after missing two golden chances to score during the match, saw his firm shot down the middle of goal blocked by Lee.

Japan’s defeat will mean they need qualify for the next Asian Cup.

The host of the 2011 event is to be announced on Sunday with Qatar the only nation to make a formal bid. 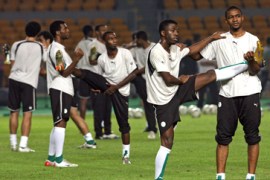 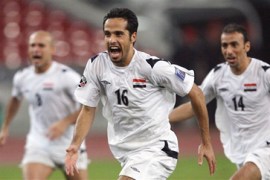 Jorvan Vieira’s squad complete their East Asian odyssey with a final in Jakarta. 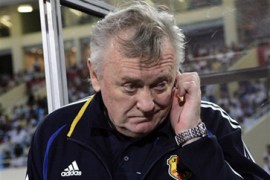 No jogo benito for Japan’s Osim