The report said that the government in Asmara, the Eritrean capital, had tried to cover its tracks through the creation of a number of business front companies.
These had included airline companies and the “filing of false flight plans indicating flights to third countries that never took place, and the unauthorised use of registration numbers and call signs.”
‘A big lie’

Eritrea later on Friday rejected the allegations as “a big lie” that were designed to mask the UN failure to halt the war in Somalia and what it said was active US involvement in fanning violence there.

Ali Abdu, Eritrea’s information minister, said: “These allegations are not new and we know where they are coming from. The UN is acting as a megaphone of the United States.”

“These allegations are not new and we know where they are coming from, the UN is acting as a megaphone of the United States”

The UN report, covering the period from November 2006 to late June this year, said that Somalia “is literally awash with arms”.

It said the situation was worse than at any time since 1991, when the country was plunged into instability following the overthrow of Siad Barre, the then-Somali leader.

Earlier this year, Ethiopia-backed Somali interim government troops ousted the Union of Islamic Courts [UIC], which had briefly taken control of large parts of the country on the Horn of Africa.

The remnants of the UIC, backed by clan fighters, have since launched almost daily attacks on the Somali transitional government, as well as the Ethiopian and Africa Union troops protecting it.

The UN report warned that although the armed groups have lost a portion of their arsenal, they “have considerably more hidden in caches for future use.”

These included “an unknown number of surface-to-air missiles, suicide belts and explosives with timers and detonators.”

It added that the fighters “have changed their tactics to involve more suicide bombings, roadside and car bombings and direct assassinations against what they consider to be important targets.”

The report also accused Ethiopian troops of using white phosphorous bombs against the armed groups in a April 13 battle that left 15 fighters and 35 civilians dead.

The experts said this was apparently not an isolated incident.

“Whatever little confidence there was in the ability of the transitional Somali government to rule is fast eroding,” they said.

“Antagonism against Ethiopia is at a crescendo, clearly not being helped by the Ethiopian army’s heavy-handed response to insurgent attacks involving the use of disproportionate force.”

Detailing its charges of Eritrean violations of the arms embargo, the experts said a Boeing 707 aircraft owned by Ghana-based Aerogem Aviation, with the registration number 9G-OAL and the call signs FBA2515 and FBA2516, flew weapons from Asmara and Assab in Eritrea to Somalia for use by the remnant UIC forces.

The panel said that when queried about these arms shipments in a letter sent last March 14, Asmara denied that the flights had taken place and dismissed the information as “fabricated accusations.”

The report also said a IL-76 cargo plane belonging to Transaviaexport, a Belarussian firm, was shot down in March by an SA-18 that was part of a consignment of six such missiles delivered by Eritrea to Somali fighters.

In November last year, the same experts said Eritrea was among several African and Arab nations that had violated the 1992 arms embargo that was designed to limit the flow of armaments to feuding clans in Somalia. 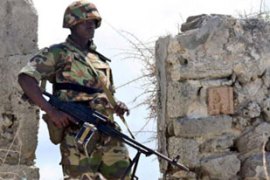 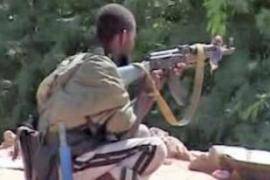 Battles follow shelling by US warship of suspected al-Qaeda fighters on the run. 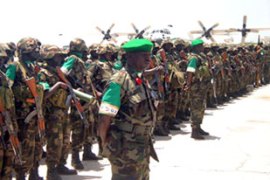 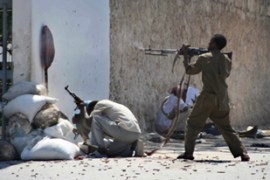 Eritrea pulls out of African bloc

Mogadishu clashes continue as Eritrea condemns criticism of its role in Somalia.