Russian troops shot unarmed residents in the streets and in their houses, demanded money from the locals and set fire to their  homes, the five testimonies presented to the court said.

The court of human rights often criticises Russian prosecutors for being ineffective but the language used in Thursday’s ruling was particularly strong.

It said all the evidence needed for a successful prosecution was available.

“No meaningful result whatsoever had been achieved in the task of identifying and prosecuting the individuals who had committed the crimes,” the ruling said.

The Russia-based Memorial group wrote a report about killings entitled: “Mopping up: Deliberate crimes against civilians”.

They killed the brothers and sister of my husband before my eyes. Do you think that money can bring them back to life?” Malika Labazanova, one of the plaintiffs, said at a press conference in Grozny after Thursday’s ruling.

“We’re not interested in money. We’re worried that they haven’t caught those responsible…. They were stoned, drugged, drunk. I can’t call them people. They weren’t people, they were monsters,”  Labazanova said.

Yusup Musayev, another plaintiff who lost seven relatives in the same raid, said he wanted “revenge,” adding: “You can’t heal our wounds with euros if there is no fair trial.”

The judgment on Thursday was the latest in a series of rulings by the European court over killings and disappearances during the  conflict between Russian troops and Chechen separatists, a conflict  that continues sporadically to this day.

An estimated 100,000 civilians lost their lives during the  conflict.

Some Russian officials have voiced concern about the number of  Chechen cases before the European court, with some members of  parliament saying that the court is biased against Russia.

“It’s a key case. This was one of the first clean-up operations and one of the bloodiest,” Oleg Orlov, one of the directors of  Memorial, said at a press conference in Moscow on Thursday. 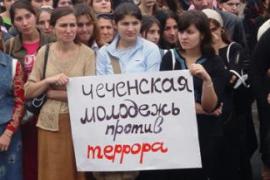 Security forces have killed four people accused of extremist activity while three Russian soldiers have been shot dead by gunmen in new violence that is gripping areas near Chechnya.