Bergsma said the expulsion was ordered by the Dutch team sponsor.

His expulsion follows the withdrawal from cycling’s premier event of one of the pre-race favourites Alexandre Vinokourov of Kazakhstan and his Astana team on Tuesday.

Vinokourov, winner of two stages in three days earlier in the Tour, failed a blood doping test after his victory in Saturday’s stage.

Rasmussen faced jeers from the crowd at the start of Wednesday’s stage for missing the pre-Tour doping tests.

The 33-year-old Danish rider had looked set to win the event which ends on Sunday in Paris, but race directors repeatedly said he never should have been allowed to start.

Christian Prudhomme, the Tour’s director, said: “We cannot say that Rasmussen cheated, but his flippancy and his lies on his whereabouts had become unbearable.”

“I can only applaud that. It’s a zero-tolerance policy and it’s a lesson for the future.”

But he added: “Why didn’t they do this at the end of June, when they had the same information?”

With Rasmussen out, Spanish rider Alberto Contador of the Discovery Channel moves into the lead at this year’s tumultuous event.

On Wednesday, Codifis rider Cristian Moreni was taken away by police at the end of the 16th stage after failing a test for testosterone.

Eric Boyer, the Codifis team manager, said: “He accepted his wrongdoing and did not ask for a B-sample.”

Codifis, France’s top cycling team, are to leave the Tour following confirmation of the results, Tour organisers said, becoming the second team to leave in 24 hours.

Moreni tested positive for the hormone following the 11th stage of the Tour de France on Thursday – the third competitor to fail a dope test.

The Italian had started the 16th stage in 58th place overall and placed 41st in the stage.

The Kazakh had won two stages in this year’s race and in the fallout of his failed test his entire team withdrew from the race.

The race was already reeling from the withdrawal of T-Mobile rider Patrik Sinkewitz after he failed a pre-Tour drugs test with high levels of testosterone.

A number of major sponsors including T-Mobile, Milram and a Swiss bicycle manufacturer are now reconsidering their future association with the Tour.

The UCI, the international body which controls cycling, was confident of a drug-free Tour after all riders in this year’s race signed an agreement in which they would forfeit a year’s salary as well as receive the mandatory two-year ban if they were found guilty of doping.

Earlier, two small explosive devices went off along the route of the Tour in northern Spain.

Blasts came after riders had already passed through the Navarra region near the border with France.

A person claiming to represent Eta, the Basque separatist group, had made a bomb threat by telephone, Spanish media reported. 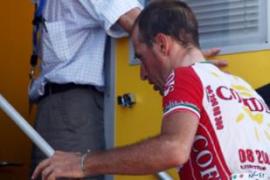