‘Positive’ EU iniative
On Sunday, the son of Muammar Gaddafi, Libya’s ruler, said efforts to free the six foreign health workers may be near a conclusion after “positive” European initiatives.
Saif al-Islam met Benita Ferrero-Waldner, the EU external relations commissioner, and Frank-Walter Steinmeier, Germany’s foreign minister, in Libya’s Mediterranean city of Benghazi.
Speaking after the talks, al-Islam said: “There are positive initiatives from the European side. We are in the last mile of a marathon race and we are in the most difficult stage.
“The outcomes will be good. We hope that that is the beginning of the end of this problem.”
Al-Islam has been a frequent participant in talks between the EU and the families of the infected children.
Torture alleged

The highly politicised trial has hampered attempts by Libya, a member of Opec, to restore full relations with the West.

The medics say they are innocent and were tortured to make them confess, and the US and the EU have stepped up pressure on Tripoli to release them. 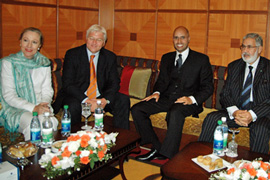 On the final stop of his European tour on Monday, Bush said: “They [nurses] should be released and they should be allowed to return to their families.

“Together with the EU, the United States is contributing to a fund that will support the children suffering from that disease [HIV] as well as their families.”

Al-Islam earlier had said: “Those who have the decision to end this crisis are two: the Libyan judiciary system and the Libyan families.”

Ferrero-Waldner and Steinmeier flew to Libya earlier on Sunday to try to advance efforts to solve the case.

They also visited some of the infected children at a Benghazi hospital and met some of the families.

Critics say negligence and poor hospital hygiene are the real culprits and the six health workers are scapegoats.

Expert witnesses at the trial testified that HIV was rampant at the
Benghazi hospital and that the children were infected before the Bulgarians began working there in the late 1990s.

Libya has suggested it can free the nurses if an agreement is reached to pay compensation to the families of the children.

Tripoli has demanded 10m euros for each infected child’s family. Bulgaria and its allies have rejected this, saying it would be an admission of guilt, but have offered a fund for treatment for the children at European hospitals.

Driss Lagha, chairman of the Association for the Families of the HIV-infected Children, quoted Steinmeier and Ferraro-Waldner as saying that, during their Benghazi visit, they were hoping for a speedier resolution of the crisis.

Lagha said: “We also discussed the issue of compensation, but this is still under negotiation.”

He has said previously that he hoped to reach an agreement on the case before June 21.
Lagha is the father of one of the hundreds of Libyan children infected and is one of the Libyan negotiators seeking a settlement of the case.
Source: News Agencies 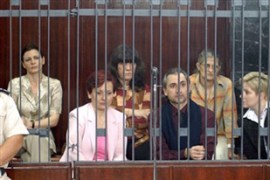 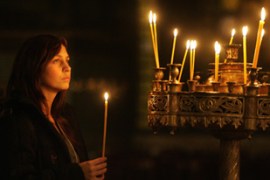 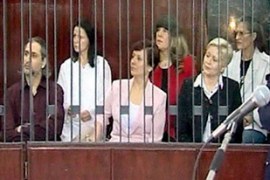 A prosecutor says there is evidence five Bulgarian nurses were tortured in Libya.