The disappearance of 5,000 guns from police and military armouries in Papua New Guinea has added a dangerous element to crime in the country.

High-powered factory-made weapons are now in the hands of tribal fighters and criminals, replacing more traditional bows and arrows and raising fears that existing tribal and gang conflicts may get even more deadly.

In the highlands of Papua New Guinea, guns have become a part of life.

For tribal fighters, conflicts with neighbouring clans over land disputes or women can last up to 30 years.

But while the tribal wars have been around for centuries – the toll has risen dramatically since guns were added to more traditional weapons.

From time to time, the police offer amnesties to try to get weapons off the streets.

What they usually get are crude home-made rifles.

But if any factory-made weapons show up, such as an M16 for example, some of the lowly-paid police officers are tempted to make a quick profit.

“That becomes the single most valuable item in the police station,” says Sydney University‘s Professor Philip Alpers, who has conducted the only independent research into Papua New Guinea‘s gun culture.

The gun, he says, could be worth as much as three times a policeman’s annual salary.

“That gun is likely to be recirculated because somebody is prepared to pay a phenomenal price for it.”

As a result, says Alpers, thousands of weapons stored by the police and military have found their way into the hands of tribal fighters – and criminals.

Three years ago Papua New Guinea’s Defence Forces carried out an audit of all its military barracks across the country.

They found that more than 1,000 assault rifles were missing, along with 100 machine guns, 52 grenade launchers and six mortars.

Security has since been increased at all armouries, but the damage has already been done.

Victor and Vavine Gabi know exactly how much damage one bullet can cause after being held up by an armed gang just outside the capital Port Moresby.

“The guy just put the gun on my mum’s head and shot her just like that in front of me,” Vavine says.

Her mother Marie died in hospital two days later – her killer has never been caught. 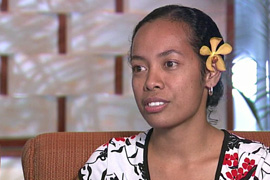 “We have the military and the police there to serve and protect us, and behind closed doors they’re feeding people off the streets with these weapons just to make some quick cash.”

The Gabi family wants to see stricter gun laws introduced – both on the streets and in the armouries.

“If disciplined forces cannot discipline themselves then we are heading for disaster,” says Victor.

Police Commissioner Gary Baki says he has already fixed the leaks that have caused the problems but believes international smugglers are to blame too.

“This country is so big, there are so many illegal firearms coming in from the border areas, which is really posing a bigger threat for us,” he told Al Jazeera.

But controlling the flow of smuggled weapons will do nothing to tackle the number of guns already on the streets.

Nor will it help change the troubled nation’s destructive culture of violence. 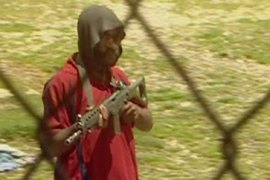