Korea Republic are through to the semi-finals of the AFC Asian Cup after winning a penalty shoot-out against Iran at the Bukit Jalil National stadium, with both sides failing to score in two hours of football.

Lee Woon Jae, Korea goalkeeper and captain, was the hero for his side as he saved two Iran penalties to set up a semi-final meeting with Iraq, and send the highly fancied Iran home early.

It was a different story for opposing captain Mehdi Mahdavikia who had his penalty saved by Lee, with Rasoul Khatibi’s spot-kick also blocked by the Suwon Bluewings keeper before Korean midfielder Kim Jung Woo sealed a 4-2 penalties victory for his team.

Amir Ghalenoei, Iran coach, tried to pull off a masterstroke when he substituted goal keeper Hassan Rodbarian, who had played for almost 120 minutes, and sent on Esteghlal stopper Vahid Taleblou for the final seconds of extra time and the penalty shoot out.

Taleblou managed to save one penalty, that of Kim Do Heon, but it wasn’t to be for the Iranians who did not create enough goal scoring chances and missed those that they did have.

“First of all I want to congratulate the Korean team,” Ghalenoei told a post-match press conference.

“I would like to thank all of my players, they did exactly what they were told, but their last touches were slightly off.

“I take all responsibility, the players did their best,” the Iran coach added.

Korea made it through to their second Asian Cup semi-finals in three tournaments after finishing third in 2000, and captain Lee was keen to go one further this time.

“I’m really happy that we won the game tonight,” the official player of the match said.

“But we have to forget about tonight, and start thinking about preparing for Iraq.

“Our team would very much like to return to Jakarta and win the Asian Cup.”

Pim Verbeek, Korea’s Dutch coach, was also very pleased with his team who took the game to Iran before both sides faded in extra time.

“I’m very proud of the boys. They worked very hard against a strong opponent,” Verbeek said.

“I agree with Lee Woon Jae being the Most Valuable Player of the game. He had some very good saves in the second half on a difficult pitch, and then obviously for what he did in the penalty shoot-out.”

The match was played in light rain after thunderstorms earlier in the afternoon had waterlogged the pitch, with the turf getting cut-up under foot and the ball skidding on making it difficult for all players.

Korea had the better opportunities early in the match as Iran struggled to keep up with the pace of the game, but the crossing of the Taeguk Warriors was far too deep after their good movement down the flanks.

Korea forward Yeom Ki Hun made a good run in the 23rd minute, but stumbled on the slippery pitch just as he was about to pull the trigger, before Kim Sang Suk had a shot that was deflected by Lee Chun Soo, but Iran keeper Rodbarian was aware enough to make a low save.

Mahdavikia had a chance on the half hour mark when cutting back onto his less-favoured left foot inside the box but pulled his weak shot wide, before good interplay between Ali Karimi and Vahid Hashemian in the 42nd minute saw the Qatar SC midfielder’s left-foot shot smothered by Lee.

With four minutes to go in regulation time, Javad Nekounam unleashed a powerful drive from long range that went straight at keeper Lee who did well to get his body behind the ball in the tricky conditions.

Iran substitute Ferydoon Zandi gave away a free kick in stoppage time to give Korea a final chance to win it in 90 minutes, but Choi Sung Kuk’s cross into the box was cleared away by the ever-present Nekounam.

To their credit, both sides pressed forward in search of a goal in extra time, and with seconds left in the first period, Nekounam teed up a shot after great evasive work by Karimi, but the big Osasuna midfielder pushed his low shot just wide with Lee rooted to the spot.

As the extra time clock wound down, Ghalenoei made his audacious final substitution when he called Rodbarian off for Taleblou with the penalty shoot-out beckoning.

“Taleblou saved 17 penalties in training, so I thought it was a good substitution,” Ghalenoei explained afterwards.

Lee, a renowned penalty saver, was modest when asked if it was his skill that had saved the penalties, or Iran errors.

“Well I think it was most likely mistakes from the Iran players,” the shot-stopper said.

“If a player makes a great penalty shot, then there’s no chance I can save it.”

Korea Republic will now play Iraq in their semi-final to be held on Wednesday in Kuala Lumpur.
“We have one day less to prepare and we played 120 minutes,” said Verbeek.

“We played Iraq before, ok it was a warm up match for the tournament, but we scored three goals against them. 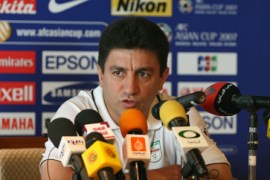 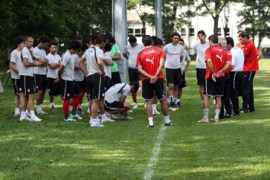 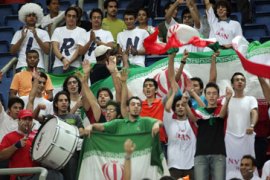 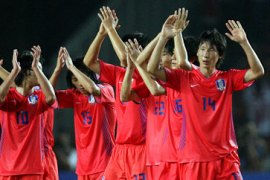