Materials seized included films and internet downloads including instructions on how to fly a Boeing 747.

“The investigations documented how the suspects … were undertaking detailed and in-depth instruction and training in the use of weapons and combat techniques suitable for terrorist acts,” the police said in a statement.

The interior ministry said a fourth Moroccan they sought was being held in a prison in an unidentified foreign country.

Among the internet files were instructions on handling poisons, explosives and sending encrypted messages via computer. Police said there were also “instructions aimed at aspiring mujahideen to get safely to conflict zones”.

Giuliano Amato, the interior minister, said the police operation had thwarted “very concrete risks” and that the possible use of a mosque was a serious concern.

“This shows the necessity to pay close attention to a place which should only be used for religious activity,” he said in a statement.

Elsehwere, an Alitalia flight, that was preparing to leave the Rome’s main airport for London, was evacuated on Saturday after officials received an anonymous phone call announcing there was a bomb on the plane.

Police later said it was a false alarm.

The 165 passengers were evacuated and baggage was unloaded, as bomb-squad officers using sniffer dogs verified there were no explosive devices aboard, police at the capital’s Fiumicino airport said.

Police were alerted at 1.15 pm (1115GMT), just 20 minutes before the flight was due to leave. The plane took off later on Saturday, with a four and a half hour delay. 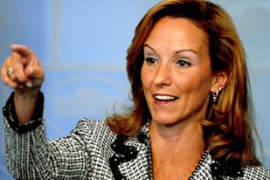 White House critics say the war in Iraq has made the United States less secure.