Hundreds of thousands of Bolivians have taken to the streets to protest against a proposal that would move the country’s seat of government from its largest city La Paz.

Local media reports suggested as many as a million people could have taken part in one of the country’s biggest ever demonstrations in La Paz and its satellite city, El Alto.

The idea of relocating Bolivia’s seat of government from La Paz to the city of Sucre in the south of the country emerged during discussions at an assembly that is rewriting the constitution.

Critics say moving the capital would cost the impoverished country billions of dollars and split the nation.

Some say the divisive proposal has been introduced by the country’s centre-right opposition in a bid to stop the constitutional rewrite, a reform driven by Evo Morales, Bolivia’s president.

Television pictures showed a sea of people stretching for several kilometres in El Alto, many waving flags, many wearing traditional Andean dress and carrying banners reading “the capital is not moving”.

“We have come to tell those who want to separate us, who want the division of our country, that their attempts will not succeed,” Luis Revilla, president of the La Paz city council told the crowd.

“The response of the people has been greater than we thought,” Paredes said.

La Paz is home to the government’s executive and legislative branches, while Sucre, 410 kilometres to the southeast is the site of the country’s highest courts.

Sucre was Bolivia’s capital during the 19th century and is still home to the supreme court and constitutional assembly.

Morales, Bolivia’s first indigenous president, says rewriting the constitution will empower the Indian majority. His support base is mainly in the highland regions in the west of the country, in areas such as La Paz.

His government says the capital city issue should not be included in the discussions to rewrite the constitution. 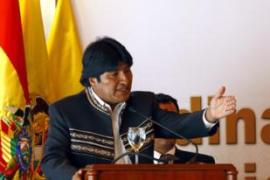 Project with India’s Jindal is expected to create as many as 21,000 jobs.