An increasing number of Zimbabweans are leaving home in search of work and refuge, with many heading to Johannesburg, also known as the City of Gold.

But, as Haru Mutasa, Al Jazeera’s Africa correspondent, reports, despite being Africa’s largest economy, South Africa offers no guarantees of a better life.

With their economy in free fall, many Zimbabweans have fled to South Africa, where concern is growing over the number of immigrants.

Al Jazeera met two young men who claim to have belonged to the infamous Green Bombers, a group of fighters that falls under the wing of Zimbabwe’s ruling Zanu-PF party, hired to spy for the government.

They say they had to join the group in order to get a special certificate, without which the government would have made sure they could not get work.

As part of the Green Bombers, they were sent to military-style training camps where they were drilled about Zimbabwe’s history and politics and promised jobs after six months of their “political work” was done.

They say they were taught how to identify people who were supporting the opposition.

One of the men, who did not want to be named, said: “We were identifying opposition members, strong members of the MDC. Those we were suspecting of causing trouble.”

He said they passed these names on to army and central intelligence officials.

The men say they never physically hurt opposition members, but they know of those who did.

One said he thought some of the opposition members they named might have been “murdered … and maybe thrown somewhere”.

The government promised them jobs in exchange for the information, but the jobs never materialised.

So they came to South Africa.

Many Zimbabweans chose to go to South Africa, rather than Zambia or Botswana which also border Zimbabwe, because they say it is easier to get jobs.

Some employers are only looking for cheap labour and are not too worried whether someone has the correct paperwork or not.

One woman, who also wants to remain anonymous, said she had been working in a supermarket in Harare, but it was impossible for her to make ends meet. She came to Johannesburg to look for a better job.

“Things in Zimbabwe are bad,” she said. “Totally bad. You can’t find any food in the supermarkets so we are suffering.”

But even if she does find a job in Johannesburg, there is no guarantee her life will be any easier.

Sox Chokowhero, an exiled Zimbabwean activist, said: “People are forced into careers they have never trained in.”

He said some turned to crime and many of the women became prostitutes. “It’s not of their choice, we don’t blame them for being prostitutes.”

This week in Zimbabwe, there were fuel shortages and food was hard to find as manufacturers refused to deliver their products to the supermarkets.

The ongoing political and economic crisis does not seem to be improving, and many of those who have fled say there is nothing for them to go back to.

In South Africa, at least, the refugees can get certain basic commodities, even if the price is that they may never see their families again. 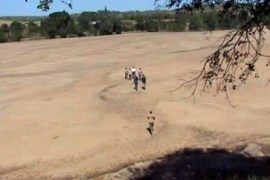